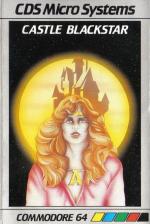 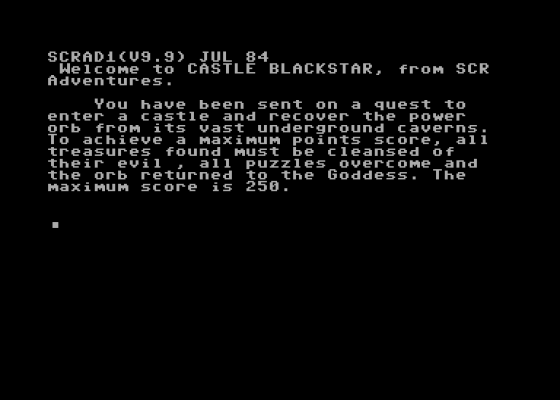 What better place to start than with Castle Blackstar, one of the greatest adventures ever to grace the humble Spectrum and how at last on the C64? Using an Infocom-style screen layout, scoring and move counter, this classic text-only adventure has you roving about the 'fantastic' Middle Ages.

I record my early disastrous experiences: After waking from my troubled dreams and being told by a pretty lady that I should go out and find a certain orb for her, I find myself in a dry valley near to a castle. Alas, I am also near to a large forest and spend many moves blundering round it. I have no objects to drop and mark my way, having lost them all as (I blush) a penalty for uttering oaths. (This latter is an excellent touch, but programmers really should try to discriminate between foul-mouthed orcs who deserve every punishment they get, and those such as I who let slip only the very occasional improper remark.)

After giving up all hope of escape, I accidentally take a wrong turning and stumble upon a gingerbread cottage. My joy is turned to sorrow a few minutes later when I am turned by a witch into a small, pink, wriggling worm! Great goblins alive, I am not used to being treated like this! But luckily, after being eaten by a bird, a goddess, bless her soul, takes pity on me and restores me back to my wise and wonderful self. 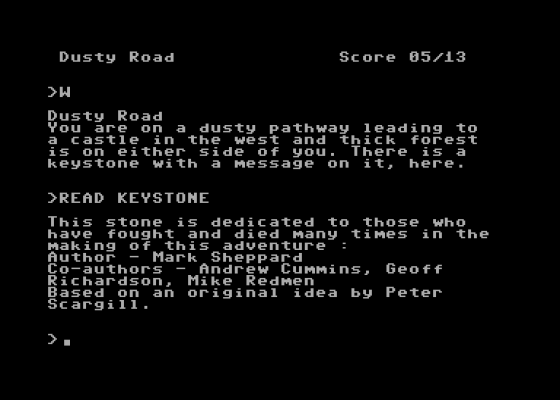 Back I go to the castle, only to find that the woodland has grown over my previous route and I am back to square one, lost! Never mind, I relish the challenge. I am pleased to report that after a few games I have been able to enter the castle and really get going.

Castle Blackstar has many interesting locations - there are plenty outside the castle as well as within. Indeed, in many ways it is up to the standard of most disk-based adventures - both as complex and absorbing. The vocabulary is very good, with plenty of opportunity to use more than just two-word inputs. There's also a good line in responses, providing variation and interest. Not to mention plenty of sarcastic comments which crop up unexpectedly and are quite amusing.

One annoying feature is that it appears impossible to restore the game to the start position without actually reloading. The White Wizard believes this shows inadequate allowance for human failure, especially in an adventure as difficult as this.

But despite this quirk, Castle Blackstar is a really great cassette adventure that should become a classic. I'm expecting my mailbag to expand by a few more inches because of it.

A really great cassette adventure that should become a classic. 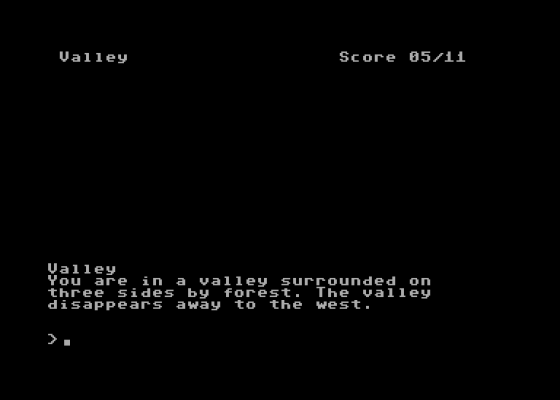