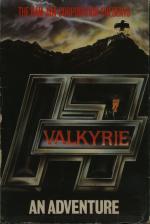 First let's look at Valkyrie 17 which originally appeared on the Spectrum last year and was hailed as being a very promising debut from RamJam, a division of Palace Software (of Evil Dead fame). The game comes nicely packaged complete with a 'document file' of loading instructions and background information.

Valkyrie 17 is a mysterious organisation that hails back to the darker days of World War II. Rumour has it that they are once again in operation, developing some unspecified super-weapon and practising the usual death and destruction which you, poor fool, must rush off and put a stop to.

The cassette comes complete with a series of ansaphone messages on one side, containing reports from your now-deceased predecessor, who seems obsessed with red kippers. By the sound of the last message on tape, cut short by what seems like a gunshot, this obsession obviously cost him dearly - you have been warned.

The game is presented with frequent graphics (though not one for every location) and is very high on atmosphere. The graphics aren't tremendous, but they are carefully done and should be studied closely if you are going to solve all the puzzles.

You start off in the bar of the Glitz Hotel in the company of a young lady who seems mote interested in alcohol than anything else. Once you've escaped from the hotel (without paying your bill), you have to negotiate the deep snow outside, a ski-slope that really ought to be called a ski-cliff, and then a village with a particularly nasty line in public aquariums.

The program will accept some quite complex inputs, but annoyingly it doesn't always tell you if it hasn't understood what you're saying. Typing 'Examine t&*!xz(', for example, gets you the response 'You see nothing special' and this lack of precision sometimes means that you're in danger of giving up on a particular puzzle even though you may be on the right track.

A good example of this is when, on the second floor of the hotel, you attempt to 'Enter Room' and are told you can't. Typing 'Go South', on the other hand, gets you in with no trouble at all - very confusing. Nevertheless, as a general rule the program is quite adept at understanding what you're saying.

What makes Valkyrie 17 so much fun to play, apart from the excitement of the scenario, is a very logical design to the puzzles and a great sense of humour throughout. At the very beginning of the game, for example, you're asked whether the copy you're using is a pirated version or not. Say yes, and the program appears to crash - it's not until you press Run/Stop in despair to start again that it suddenly reboots and lands you in the hotel.

This high quality and sense of fun is maintained throughout the game. RamJam's next program, Holiday in Carpathia, is soon making its appearance on the Spectrum, so C64 owners shouldn't have to wait too long for a sequel. In the meantime the program's yours for £9.95, which seems a bit on the steep side, but it's an enjoyable romp nevertheless.

This high quality and sense of fun is maintained throughout the game.