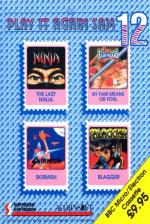 Yet another Play It Again Sam! We are now up to number twelve in this apparently never-ending series of four-game compilations from Superior. This one features two oldies, Skirmish and Bladder, plus two fairly recent releases, By Fair Means Or Foul and The Last Ninja. The inclusion of the latter two on this compilation is surprising as they are not really that old.

The Last Ninja is a game based on the theme of martial arts, where you guide your man in his quest to reach the inner sanctum of the palace of Lin Fen. You must collect objects and weapons along the way to help you achieve your goal. As usual, there are many hazards to contend with, puzzles to solve, and assailants to overcome. The game features some nice graphics with good animation. However, gameplay can be a bit of a trial at first with the number of key combinations to learn and remember.

By Fair Means Or Foul is a boxing game that can be played by one or two players. The general idea of this game is to knock hell's bells out of your opponent. There are different legitimate punches and moves you can make, but if they fail, you can always throw in the odd dodgy one when the referee isn't looking. This game is again not easy to master, needing the use of some nice keys. A joystick, to my mind, is a 'must' unless you are blessed with manual dexterity of Fagin.

Next we can Skirmish. This is a version of the old arcade classic Joust. The game consists of guiding a knight around the screen on the back of a large bird, while being attacked by other such birds. To add to your troubles there are a few Pterodactyls also intent on doing you harm. It is quite a simple game with rather sparse graphics but nevertheless very addictive.

Lastly, we have Blagger. This is a real oldie which was originally released by Alligata way back in the Beeb's early days. It is a platforms and levels game where the object is to collect the various keys located around the screens.

There are moving objects to avoid and puzzles to solve in achieving your task. The graphics and sound are both good, and key control is kept very simple. It is easy to play in the early stages and quickly becomes quite addictive.

To sum up, this is one of the better collections Superior has released in this series. The two combat games are good, provided they are your type of game. The other two are probably of wider appeal, and definitely have that addictive feel.

One of the better collections Superior has released in this series.
Logout