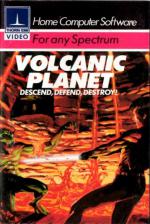 Working Up A Lava

Thorn-EMI have spread their wings and extended their activities into the Spectrum market with the release of a game of maze-running and bug-bashing.

You must plant a Plasma bomb deep in the bowels of the underground metropolis on the Planet Zeron. The bomb, when detonated, causes a volcanic eruption which will destroy the city - you too, if you're still in the vicinity.

The game can be played with joysticks or keyboard and any of five skill levels may be selected. Most of the screen is taken up with the aerial view of part of the first level of a red-bricked city.

On the right-hand side of the screen are a number of aids. One is a small hi-res map of the whole level - a magenta marker shows your current position. When you are getting close to a lift (which will transport you to another level) the marker turns blue.

As well as Plasma bomb and weapon status indicators, there are four bars giving the state of your life-support systems.

Moving off the edge of the display causes the screen to scroll, revealing more of the metropolis. You are represented, unexpectedly, by a black tarantula-like creature while the Zerons are scuttling, purple crabs, they are more numerous than ants on a picnic and will immediately start firing. You can fire back but only in the direction you are facing.

Hunting for a lift is aided by the hi-res map but takes time. Power and oxygen can be replenished by moving over one of the power packs and oxygen bottles lying around the city.

On the lowest level, you've got to find the volcanic plug, a black shape with a glowing centre. Prime this and get the heck out of there - the bomb has a short fuse! When it explodes each floor fills with lava - you've got to make it to the top before it catches up with you.

The plot is original and while the graphics are not stunning, they are good enough. There are no sound effects. Being set a finite mission gives the game an added zing.

The plot is original and while the graphics are not stunning, they are good enough.