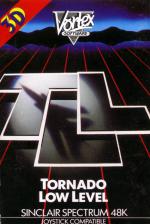 WHY any self-respecting pilot should want to fly a jet fighter at high speed through a built-up area a mere 10 or so feet from the ground is difficult to understand but that is the premise behind TLL from Vortex Software.

You are the idiot who has opted for the mission, of course, and your aircraft is the Tornado. You have to take off from a runway and seek six enemy targets represented by small discs. Unfortunately for your health the only way to destroy the targets is to skim above them, thus putting you in the embarrassing situation of risking collision with trees or telegraph poles.

Vortex claims to have produced the best-ever graphics. Such claims should be disregarded on principle but the picture of the town in which the game takes place is beautifully detailed in quasi-3D perspective; the representations of the buildings solid and attractive; and the screen scrolling is absolutely smooth and flicker-free.

The Tornado is less impressive but casts a shadow on the ground which, while irritating at first, becomes very useful as a guide to your altitude and precise position.

There is the mandatory display of fuel gauge, altimeter, time elapsed and so on, as well as a map of the playing area and a small outline of your position and any targets or solid objects nearby.

Because the graphics are so highly-developed, the operating system for the Tornado is simple and cannot be described as a simulation. You cannot accelerate or decelerate except by changing the attitude of your swing wings, and take-off and landing is a matter of pressing the appropriate button at the proper time, although obtaining a good approach to the runway for landing is more difficult. Fuel is limited and there is usually only sufficient time to destroy two targets at most before being forced to land and refuel.

It all adds up to an exciting game, requiring fast reflexes and cool nerve, and if you think you are made of the right stuff, try flying under the telephone lines without panicking. TLL is no picnic.

An exciting game, requiring fast reflexes and cool nerve, and if you think you are made of the right stuff, try flying under the telephone lines without panicking. No picnic.
Logout