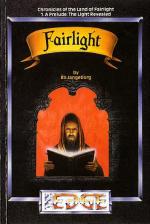 ACROSS THE incredibly Flat and Featureless Plain, on the other side of the impenetrably Thick Forest, just beside the Stream that Dries Up in The Corner of The Map sits the Enchanted Castle.

Haven't we had enough of them, after Avalon, Knight Lore, Dragontorc, and Tir na Nog? OK, so the setting of Fairlight is not promising. There's a wizard locked up in the castle and you have to find a magic book to release him and save the great gizmo from going ape with the wotsit.

Don't worry. When you actually get inside the castle you'll forget about how bored you are with fantasy. Fairlight, from The Edge, a division of Softek, is a quest with a difference.

The difference is largely in the graphics. They are the best we have seen of the two-colour 3D variety, streets ahead of Knight Lore and Alien 8 for variety and elegance of design. There are stairways and catwalks, corridors and chambers, trapdoors and courtyards in the castle; mapping Fairlight is going to be a problem, as the castle is designed like a castle, not a chessboard with a lot of walls between the squares.

Your character is an adventurer, cloaked and armed with a suitably workmanlike orc-sticker for those embarrassing social encounters. The figure moves in four directions and can jump, pick up objects and fight. It does those things a lot faster than Sabreman, whose antics are beginning to look decidedly creaky against this new wave of arcade-adventures.

You can push objects around as well, stack chairs on tables to get at high doors or windows, and generally derange the furniture at your pleasure. But the problems have a more naturalistic quality than usual. Keys tend to fit doors - somewhere - and performing various sequences of action will reveal further depths to the castle as secret doors are opened.

Monsters include guards and trolls, club-wielding heavies who can be fought or outwitted. Realism in the fight sequences includes comparisons of strength.

In fact, every object and character in the game has a weight. Objects carried are displayed on a small scroll tucked away in the corner of the screen, one at a time - the one you have selected to hold. You can carry up to five objects altogether, but the weight is important, and you may only lave strength enough for less. Similarly, 300 pounds of gibbering green trollflesh packs a bigger punch than one wimpish little prison guard.

Fairlight is to be the first of a trilogy of games set in the land of Fairlight and future games will take the player into the surrounding countryside.

The secret of the stunning graphics is Grax, a high-powered low-level graphics language developed by Softek. Bo Jangeborg, who is currently putting the finishing touches to Fairlight, uses Grax to develop complex screens which occupy only one or two hundred bytes of memory at most. Softek originally thought in terms of a 35 screen game but the finished product could contain up to 100, depending on Bo's stamina.

Tim Langdell, manager director of Softek, says Grax uses adapted core routines from The Artist, a graphics package reviewed elsewhere in this issue. But he's thinking about releasing Grax in the shape of an arcade-adventure design package.

Meanwhile, watch out for Fairlight, it's got to be one of the best arcade-adventure quests of the year.

This has got to be one of the best arcade-adventure quests of the year.