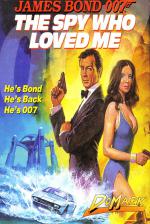 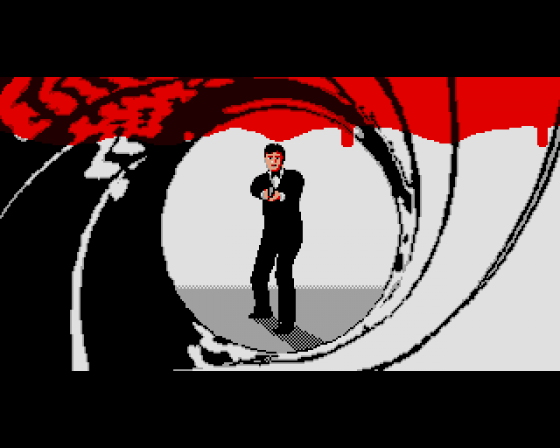 Evil genius, Karl Stromberg, has stolen two submarines containing nuclear missiles and is willing to use them, unless the governments of the world submit to his demands. James Bond is called in, with his usual assortments of guns, gadgets and corny wit to deal with the situation.

Starting off in Sardinia, Bond has to race his Lotus Esprit (lots of them about, this issue...) back to his hotel to meet Stromberg, trading his car in for a speedboat along the way. Getting there is no easy task, as hazards such as oil slicks, enemy vehicles and civilians litter the road, and must be either avoided or blown out of the way.

If James drives over enough "Q" tokens along the way, he can trade them in for additional weapons by driving into the Q-Truck which appears occasionally. 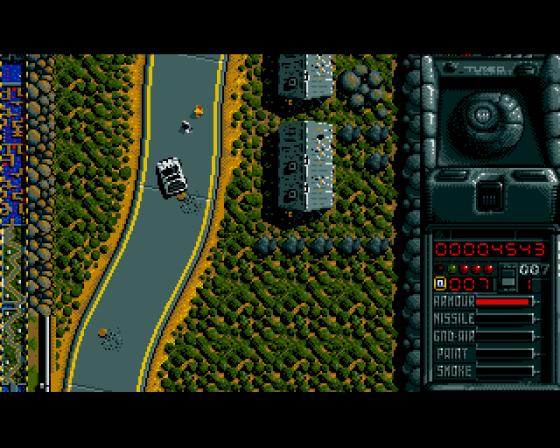 At the end of the level, Bond is forced to drive off a jetty, and turn his car into a submarine! Even then, he's not safe, as Stormberg's undersea forces are everywhere, trying to eliminate the plucky sky. The car isn't particularly well-armed at the start of the level, but add-on weapons appear every so often, providing four-way and eight-way torpedoes and a laser gun to even the score.

The next scene takes place in Stromberg's super-tanker, where he is holding the captured subs. To break into the tanker's control room Bond has to ride a moving security camera to the control room where he can plant a bomb. Meanwhile, he has to gun down Stromberg's henchmen, Operation Wolf-style, before they kill him.

After reprogramming the submarines' targeting computers via a symbol-matching game, played against the clock, James has to WetBike his way to Stromberg's place, blasting away at the defenses, while collecting air-dropped weapons supplies.

Once at the base, Bond has to defeat Stromberg once and for all, but his KGB counterpart, Anya, has been captured and is being used as a body shield by the madman. This is another Operation Wolf-type game, with enemy troops popping up in front of Bond's gunsight left, right and centre. But Stromberg has an ace up his sleeve - a six-foot assassin with metal teeth whose name is Jaws...

After Licence To Kill, things have been looking up for Domark's Bond licences, and now with The Spy Who Loved Me, it looks like they've hit on a winning formula. Okay, I can hear you all screaming "Spy Hunter" and "Operation Wolf" but The Spy Who Loved Me combines the two styles of gameplay extremely well indeed.

The graphics are small, but perfectly formed, and the scrolling is fast and smooth. The sound is spot-on, with various explosions, screams, screeches and gunshots, and a special mention must go to the house remix version of the Bond title theme. I thought it was absolutely brilliant, and I'm a Metal fan!

This is the best Bond game yet... by far, and for anyone yearning for the bygone days of Spy Hunter, take a look. You won't be disappointed.

This is the best Bond game yet... by far, and for anyone yearning for the bygone days of Spy Hunter, take a look. You won't be disappointed. 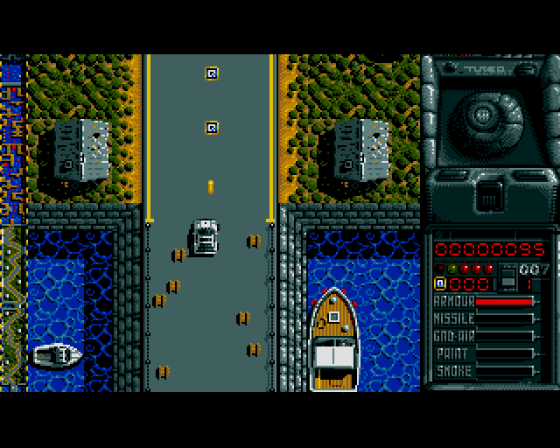