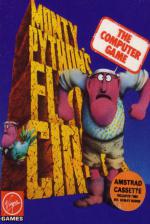 Mr. D P Gumby (he of the knotted hanky) has lost his mind, literally. During routine surgery, his brain split into four and did a runner. Gumby now has to set forth in search of his missing cranial manner, only his head is now mounted on a fish. The scrolling trout-'em-up action is all viewed side-on, and drawn in true Terry Gilliam style.

Gumby, armed only with a prize fish and some knowledge of cheese, must travel through various levels in different forms, collecting tins of spam to exchange for a piece of brain at the end of the level. Here you take part in an argument, and must disagree with the John Cleese lookalike to get as many bonus points as possible.

Once Gumby's brain is back in his bonce, he can move onwards to the exciting world of chartered accountancy.

Rather than tackle the subject head-on, Virgin and Core Design have produced a game which involves practically every element of the Python train of thought. The graphics are extremely well drawn, and are totally reminiscent of Gilliam's cartoons, and the intermittent breaks that crop up totally unexpectedly are hilarious... at first.

After a few times, they begin to drag, but fortunately they can be turned off. Imagine my shock when, halfway through a game, a "game over" message appeared! This is made even stranger by an apology for the interruption of play!!

The Sousa theme tune is a little flat, but the sound effects are great - the argument sketch and spam sequences are sampled straight from the show!

To be quite honest, Monty Python doesn't seem to be a game as such, more like a collection of jokes that makes you want to play on to see the next gag. Fans of the series will love it, but the rest of you will probably get a little tired of the rather basic gameplay after a while.

Similar graphics, and pretty colourful too. However, it's exactly the same game, but the speech is missing, which was a pretty major point of the 16-bit versions.

Identical to the Amiga version in all respects, so the same comments apply.

Fans of the series will love this, but the rest of you will probably get a little tired of the rather basic gameplay after a while.