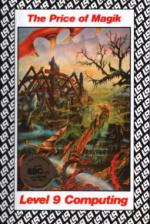 The Price Of Magik | Overall Summary

Price of Magik is further proof of Level 9's position as the leading UK adventure house.

It is an enormous adventure, containing a considerable variety of complex puzzles. I've been playing for days and I've hardly started.

At the beginning of the adventure, you find yourself on a driveway outside a strange house: you have a choice of exits - up, up, and away, to the woodshed, or into the house. If you go in or up, you'll discover that you can't see in the dark.

Once you've found out how to see where you are going, you can begin to explore. All you are told is that you must learn everything you can about magic - and you know nothing more than the bare fact that there are 18 spells you can learn.

As it turns out, learning spells isn't that difficult, although you also have to find out how to cast them. Once you know what the magic work for a particular spell is, and you know the format for casting it, you can give it a try. If nothing more, the program will tell you what focus you need to cast the spell.

The main trick to the game is finding and securing the various items you need to cast the different spells, and then working out how, why and where to actually use them.

So far I've discovered three magic words, and managed to cast one spell. At first it's a little odd that while the program is quite happy to tell me what I need to cast a spell if I don't have it, I haven't the faintest idea what item lets me cast the spell I can do.

I've come across a couple of rather nasty monsters - a skeleton and a werewolf - and a ghost who (or should that be which?) I managed to lay by a little industrious spade work and rolling the bones. By now I'm attired in a natty suit of armour and some plush robes. And as for what I'm carrying, well, I could open a supermarket: a candle and a book (no bell yet), a spade, a cage, a grimoire, a knife, various scrolls and bits of parchments, some herbs and various other bits and pieces.

Unlike other adventure games, though, objects don't count as treasure - you score by working out how to use them in various spells.

If you type in Score during play, you get a rather cryptic message which tells how sane you are, in percentage terms, what level of magic use you have reached, and how old you look. The object, it seems, is to become as mad as possible - I've found a message somewhere that says "you have to be mad to use magik."

The parser which interprets your keyed-in responses is excellent. It can understand a very impressive selection of quite complicated commands: you can also string together commands by the use of commas, so once you known what you think your should be doing in the early part of the game, you can zip around, get everything you need and then get into the house very quickly.

Armour is a necessity as the various creatures you meet will often attack you. So is a good weapon - taking on a werewolf with a titchy little dagger just isn't on, I discovered: it made very literal mincemeat of me before I'd even dented it.

One interesting thing about the cassette is that there are two different versions of the game on it. One is the standard text and graphics version running on the 48K Spectrum. The other acts as a text-only version on the 48K, with more descriptive prose included but, if loaded on to a 128K machine, is a text and graphics version which makes use of the expanded memory. This means that you get extra commands, like RamSave, which lets you save your location to the machine's own memory, and Oops which lets you take back a number of moves, 9's Pete Austin told me.

Graphic versions of the game are protected by Lenslok - but you only have to use the bloody thing every so often, which means that you can play along happily for hours. I was very grateful for this, as I can't seem to work the Lenslok system with any ease.

Everything in The Price of Magik is of the best - plot, parser, graphics, and above all the execution of the game.

Level 9's best yet - they're amazing. I've been playing for days and hardly scratched the surface.

The Price Of Magik | Overall Summary

Everything in The Price of Magik is of the best - plot, parser, graphics, and above all the execution of the game.