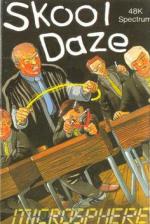 Skool Daze explodes into the imagination with a cloud of chalk dust and a hail of catapult bullets. It is one of those rare games where nothing over-ambitious is attempted in the way of programming but all the elements unite to provide an addictive and satisfying romp.

The screen displays a school, with classrooms spread over three floors. The playing area is not large, being about three screensful of scrolling school, but the careful planning of the game allows for plenty of action.

You are Eric, a Bad Boy whose dreadful school report is locked in the headmaster's safe. The task is to get it out. Only the masters know the combination of the safe and to make them reveal it you must set all the school shields flashing by hitting them with your catapult. A nice refinement is that Mr. Creak the History Master is a doddering fellow who cannot remember his part of the combination and must be forced to reveal it by writing his date of birth on his blackboard.

In between performing the quest, you must take part in the normal activities of the school - that is, playing and attending lessons Instructions appear at the bottom of the screen and if you are caught in the wrong place by a master you will receive lines. 10,000 lines and you are sent home, and have to start again.

The characters of the game have a cartoon-style quality and represent school stereotypes - the trendy master, the bully, the tearaway and the swot. You can change the names to those of your choice which should make the game even more fun.

Whether or not you want to attempt the extremely difficult problem of cracking the headmaster's safe, Skool Daze is tremendously enjoyable. You can have a great time simply trying to survive, as masters dole out lines with hideous abandon and, sometimes, quite unfairly. You can have catapult fights with other boys, and if you manage to fool a master into giving the bully or swot some lines then you lose some from your own tally.

They may not be the happiest days of your life, but Skool Daze should provide some of the happiest hours of the day.

They may not be the happiest days of your life, but Skool Daze should provide some of the happiest hours of the day.