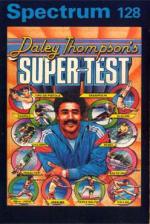 The world-famous T-shirt enthusiast is back again in a repeat showing of some of his favourite events, in the 128 version of Daley Thompson's Super Test. Twelve separate events are included, four from Daley's Decathlon and all eight from the sequel, the 48K Super Test.

The game takes an enormous length of time to load, but all the events go in at once, so you don't have to mess about playing four or five at a time - though you still only get three lives for the whole lot. That makes things a good bit more difficult.

For those who are not yet aware of such novel concepts as joystick fatigue, there are two basic techniques involved in playing these games. Smashing the joystick left and right at high speed builds up power, speed, energy or whatever, and pushing the Fire button at just the right moment for the correct length of time will allow you to hit targets, jump, throw things at the correct angle and so on.

The game opens with a dramatic rendition of the theme tune from Chariots Of Fire to put you in the mood. Short bursts of alleged music link the various sports and new sounds have been put into some of the events for firing pistols.

The eight Super Test events look very much the same as the original events, but the four from Daley's Decathlon have been juiced up to a similar standard of graphics. The old flickery Daley is now much more solid and the backgrounds are more pleasantly coloured.

This sort of compilation program, while it offers nothing of any great novelty, makes sense on the 128. It is a distinct advantage to be able to play all the events on a single load.

Our rating is not, of course, based on value for money as Super Test is free with the Spectrum 128, at least for the time being.

In the meantime, it's a good, addictive game for new users to get into quickly and will obviously have a wide appeal.

A good, addictive game for new users to get into quickly and will obviously have a wide appeal.