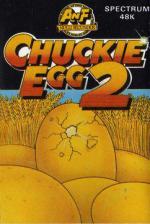 SO YOU THOUGHT you had seen the last of it. No more Chuckie Egg, no more little yellow Harry to run up ladders and jump off platforms. You were wrong. Chuckie Egg II has arrived, and it's every bit as nauseating as the original.

Chuckie Egg was one of the earliest levels and ladders programs, a game which everybody loathed and nobody could stop playing. The sequel has Harry attempting to get a chocolate egg factory working again, and has a definite arcade-adventure feel to it.

Played across 200 odd screens of basic girder-plus-peculiar-monsters graphics, Chuckie Egg II requires much shinning up of ropes and jumping over rats and lizards to complete. Objects which must be picked up along the way are used in other screens to delay monsters or achieve a particular exit.

There is little or nothing original about the program, which relies heavily on all the old conventions of the genre, although to be fair A&F can lay some claim to having established a few of those conventions themselves. The graphics are lurid and not of the best detail, but have that special Chuckie Egg quality all the same. An improvement is the abolition of the requirement to complete each screen before proceeding further. That is no longer necessary, and the resulting maze of exits and entrances to different screens is one of the more complex we have seen.

A competition with cash prizes for the highest scores adds a little zest to the proceedings, and certainly A&F groupies will find Chuckie Egg II just as frustratingly addictive as their first encounter with the henhouse, those many moons ago.

The graphics are lurid and not of the best detail, but have that special Chuckie Egg quality all the same.