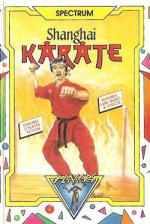 The Changchun Academy, which based its disciplines on the secret karate scrolls, was the most famous karate school in northern China. A failed former pupil, Wang Chen bore a terrible grudge and massacred both masters and students in one terrible night of carnage. Only Lo Yin survived to make a desperate (and ultimately successful) attempt to transport the precious scrolls to the safety of Shanghai. Mission accomplished, Lo was lured into a dangerous dragon temple and never seen again.

The player takes the part of Lo Yin (player two can take the part of Wang) in an attempt to relive the six levels of his journey to Shanghai. In an underground cave and on the Great Wall Lo meets one of Wang's men in single combat. Using 16 different moves he attempts to chop, kick, sweep and block his way to success by reducing his opponent's energy to zero four times.

Following a battle with Wang's men on the shores of the Yangtze river, Lo reaches Shanghai. The enemy attempts to defeat him twice more (in the harbour and the city sewers) before Lo enters the dragon temple and enacts the ending of his unfinished tale.

'Another budget offering fails to hit the mark. The backdrops are colourful, the sound is atmospheric - it's just the gameplay that leaves a lot to be desired. Wang's men aren't particularly hard to defeat; a few well-placed kicks and you're well on your way to mediocre success. Unfortunately you have to beat each opponent four times. With the sixtieth consecutive punch your interest begins to wane... Any remaining excitement is quickly dispelled by the slow movement of the fighters. When Lo Yin jumps, for example, he floats in slow motion through the Shanghai sky - a nasty experience and one, on the whole, that is best avoided.'

'Players have a great gift of producing a product with super presentation, clear concise instructions and great sound (very much like Code Masters) - but, yet again, a game which is only mildly addictive. Like most games of its genre Shanghai Karate requires little skill - just constant use of one or two moves to defeat the computer opponent. The graphics and sound are the only real drawing points of the game. However, the overall attraction of Shanghai Karate diminishes after a few games due to the vapid gameplay. One plus point though: the gong sound on the 128K is sheer brilliance (but not really worth £1.99).'

Graphics and sound are the only real drawing points of the game. Overall attraction diminishes after a few games due to the vapid gameplay.