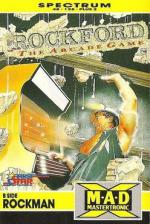 It has to be said. Mastertronic is the master of exploitation. It takes a certified popular computer character and turns him into an arcade game by the use of some relatively cheap computer boards. Then, as the arcade game has become reasonably popular, they do a computer conversion of the arcade game of the computer game. Good thinking, eh? With a large profit too, I suppose. But, for those who are new to the Spectrum market, here is a short portfolio on Rockford.

Way back in the mists of ancient time, a software firm by the name of First Star wrote a game. A game so simple, yet fiendishly difficult, it would have computer owners in their thousands playing for eons. Boulderdash was born, and its main character, a stick man with a large head called Rockford became a national hero. Who was he, where did he come from, what was his telephone number? This is what the public wanted to know.

But he wasn't happy. "I wish they had designed me a bit better. I look like the little bit of chewed Lego that no one can find any use for and will never look good on the little house they've been making for the last two weeks." Little did he know that his dream was soon to come true. One day, Mr Mastertronic and his younger executive, Mr Arcadia, came knocking on his door. "Hello," they said, "we'd like to put you in an arcade game, make you look a lot better, give you 5 disguises, give you 5 different areas to play in and generally make you lots of money." Before long, the contract was signed and Rockford was immortalised on a chip on an Amiga A1000 motherboard.

You can wake up now. The history lesson's over. Rockford has changed. I would just like to point that out so that the millions of Boulderdash fans don't go running down to their latest software dealers brandishing £5 notes. He may have changed, but not for the worst in all cases (though he has in some). Allow me to explain.

Rockford is not a single person anymore. He is now 5 people, any of whom you can select from the start. Each of his 5 personae has a specified area to explore, each with a certain number of levels. You can choose to be a doctor, an astronaut, a cook or even a cowboy. Each character has different things to collect. For the cowboy it's gold coins, for the cook, it's hearts. The game is played in the same way as Boulderdash, really, which is a good thing. The scrolling has been improved, although some ardent followers might disagree with me on that. The graphics have also been greatly improved. You can now see what he's meant to be, be it a spaceman or a cowboy. To some extent, though, the gameplay has been lost. The one great thing about the original was the excitement it generated and the pure arcade action it contained. I still play it now, and I can name quite a few others that do too. Now the cuteness has gone from the game. Rockford is a regular computer character, not the sort to be invited on chat shows. Still, you can't win em all.

I'd say it was a good effort by Mastertronic. Though I can't see the majority of BD lovers being overly excited by this, it's still a good game in it's own right, and when you consider the price, a very good buy. But wait, I haven't told you all. As the game is out on the new MAD X range, you get a free game on the B side, which in this case, is Rockman. I think that's one to look out for, don't you?

Quite a good attempt at nostalgia, and with a free game on the B side. My advice is, if you see it, buy it.

Quite a good attempt at nostalgia, and with a free game on the B side. My advice is, if you see it, buy it.
Logout