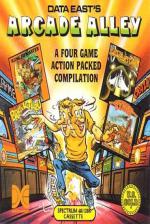 There have been some really good arcade conversions around. Even from the early days of the Spectrum. Take your Space Invaders, for example, or your Pacman. They were classics. The recent ones have been quite acceptable too. Karnov and Rastan to name but two. But as with any branch of the software tree, there are the turkeys.

Kung Fu Master is, quite frankly, terrible. The scrolling is slow and jerky, the graphics are poorly animated and the playability level is into minus figures. Express Raider is worse, if that is possible. BreakThru is crud, pure and simple. The idea of driving an oversized dune buggy through lots of different areas may be a good one, but when the game has been put together as badly as this one, the idea comes to nothing. Finally, Last Mission. Probably, the saving grace of the tape, this 360° scroller over a multitude of levels is actually quite good in places, but unfortunately lacks the 'ooomph' to pick up the compilation.

Surprisingly, a duff from US Gold. See me after school, Master Tidsall, and I don't want to see it (or the moustache) happen again.

An arcadester's nightmare. 4 no hope conversions, and one that doesn't really make you sweat with excitement.

An arcadester's nightmare. Four no-hope conversions, and one that doesn't really make you sweat with excitement.
Logout