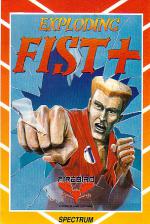 Should you happen to get bored with Exploding Fist+ you can flick a quick mental reset switch and play it as "Advanced Dance Simulator". This works particularly well on the Spectrum, where you can force your three would-be kung-fu combatants into a never-ending little polka up and down the screen by simply keeping the character you control yourself in constant movement. It is thoughts such as these that sustained me through the mental wasteland of reviewing Exploding Fist+; it simply isn't a very good game.

On both Spectrum and C64, the game plays in exactly the same way. Your objective is to rise through the karate ranks to reach tenth dan, taking on faster and tougher opponents as you do so. The backdrop for your fights is a simple US street scene, complete with flashing Vegas-style "Coca-Cola" signs and so forth. Points are scored by each hit, and should you take one on the chin, you will be knocked out for a few moments, indicated (on the C64) by comic book stars circling your head.

A row of lights at the top of the screen indicate the points you are scoring and when one player reaches a full row of eight, positions are assessed and the top two scorers go forward. When there are no human players left, the game is over.

The two player option is probably most fun, as you can gang up on the machine fighter together, and you get a bit of needle into your own bouts. Every couple of bouts, there is a bonus points screen which involves throwing knives at advancing Ninjas, but isn't very involving. They lurch towards you in massive jerks, and there is no attempt to recreate a throwing motion with your arm: a bit of pretty irrelevant business, really.

This is the C64 bonus game. On the Speccy, it involves hitting demons who appear from behind the dustbins and windows of a dark alley by moving a cursor over their positions.

But these fiddly little details are not what makes a game like this, it is the quality of the fighting sequences. When you surrender all change in background, scrolling and adventure aspects of a beat-'em-up, the fighting has to be of a really high standard. On the Spectrum, the game really is sub-standard: sound is weedy, sprites are rather mincing (always a bit unfortunate for something entitled "Exploding Fist") and generally I have yet to see anyone keep playing it beyond fifteen minutes.

On the other hand, the blocky, three colour sprites of the Commodore work quite well, and there is plenty of cartwheeling, fly-kicking fun to be had. The number of moves are complicated so while you flick through your range to find out just whether it was lower right or top left that delivers a shin kick (it's lower right, fact fans) you are likely to find yourself decked. Should you be a beat-'em-up fan you might have fun with this, if you can cope with sound that so little resembles any martial arts style yelps that people thought I was killing a cat in the games room.

However, it has some stiffish martial arts competition this Christmas and if Double Dragon was less than impressive on 8-bit (or 16 for that matter) there is still Dragon Ninja to consider. Definitely a case of having a good old look before you spend your beat-'em-up pound. I'm willing to bet it wouldn't be on this rather limited and disappointing offering.

Limited and disappointing... It simply isn't a very good game.