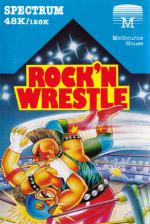 If you've ever wanted to beat Giant Haystack or Big Daddy at their own game, then here's your chance.

Fresh from its success on other micros comes Melbourne House's Rock 'n' Wrestle, an attempt to do for the grunting, sweaty passion of wrestling what Way of The Exploding Fist did for Kung Fu.

You control one of two fairly sizeable sprites - representing the Masked Terror, or the Pink Punk - and you have to wear down your opponent by variously nutting him, punching him in the fundament, and throwing him to the floor.

Each of these manouevres, if executed properly will, score you points and, reduce your enemy's energy level.

If you are playing the computer, beating the first opponent means you move on to the next challenger, who is of course tougher, meaner and graphically different. So far I've seen a punk with a mohican (bit like that twerp from Sigue Sigue Sputnik), a real weirdo with a wizard's hat and a black beard, and someone who looks like Dallas' very own JR.

Movement is either via keyboard or joystick, and is fairly standard left/right up/down. Performing any of the offensive actions involves getting close enough to your opponent to smell his breath, then pressing fire followed by one of the movement controls. This results in your character reaching out and hopefully hurting someone.

As yet I haven't worked out if particular moves score more points, but so far I've got a neat line in instep stomping.

There is a two player-option, and which I recommend for practising - your foe stays still, and you can sneak up on him.

The graphics are reasonably good, although at one point I did notice a disembodied head appearing for an instant in the centre of the ring as I was being jumped on in a corner. Still, they do say that being kicked in the head with sequinned boots for any length of time tends to make you see things...

Rock 'n' Wrestle didn't grab me straight away but now, after a while, I have to say I suspect I will be persevering with it.

A decent game on a fairly unusual subject. If you're a sports fan, go for it: if not. It could be a grower

Rock 'n' Wrestle didn't grab me straight away but now, after a while, I have to say I suspect I will be persevering with it.