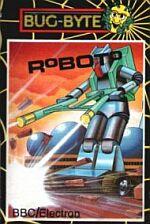 As if the insatiable appetite of Beeb games players for arcade conversions was not enough, they are now being tempted by the thin end of the Spectrum games market, with such recent conversions as Manic Miner, Jet Set Willy (with Jet Set Willy II promised this autumn) and now Eugene Smith's Roboto - Beeb programming by J. R. Wilson.

The game has both the strengths and weaknesses of much Spectrum software - that is, an awful lot happening in each screen but dreadful, blocky little graphics doing it.

In this game, you must travel around the 51 screens, dodging firing robots, moving walls, etc, by careful four-directional movement and judicious use of your own cannon. It is like a hundred or so Spectrum games with nothing to commend it except its compulsive nature.

It doesn't, of course, use any of the features of the Beeb to their best advantage but then that isn't really the point of a budget conversion. Budget games should be lively and playable; this one is certainly both of those. If we leave dynamic graphics and complex arcade adventures to the top end of the BBC market, then the bottom end could do a lot worse than be filled with games like this.

Budget games should be lively and playable; this one is certainly both of those.