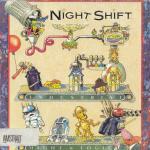 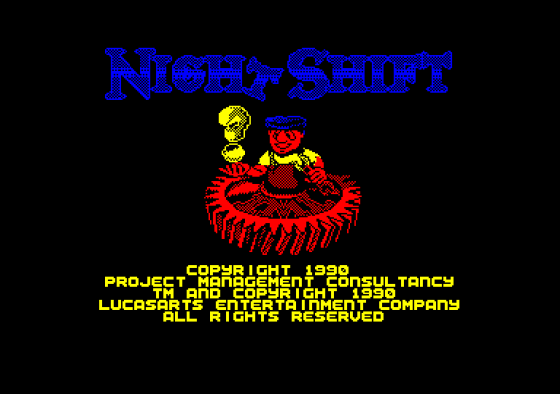 Factory work is noisy, smelly, dirty and altogether 'orrible. It's also boring, repetitive, mind-numbing... much like being lashed to a chair and made to watch episodes of Coronation Street eight hours a day.

Or is it? In Nightshift, factory work is anything but boring... For a start, you work in a factory that produces little toy dolls (oh joy!). And, as you may have guessed by now, you're running the nightshift in this toy factory. On your own. That's not so good, because although the huge machine (called 'The Beast') is in theory full-automatic, things can and do go wrong. You will often find that the previous shift-worker has left a conveyor belt running the wrong way, or the gas has been allowed to go out under the resin-producer. There are also little gremlins running about the place which, when they're not getting under your feet and slowing you down, like nothing better than to mess up your production line.

Things start off pretty easy, though. Your first job, on Level One, is simply to get the Beast running and turn out a handful of dolls before your shift is over (time remaining is indicated by a flickering candle on the status bar at the bottom of the screen). You'll find whole sections of the Beast blanked off behind metal panels, which means these sections will operate automatically, needing no attention from you. However, what you will have to do is go for a quick pedal on the bicycle to generate some electricity, then zoom up to the top of the Beast to plug in the resin-melter (by kicking the plug), make sure the gas jet is set to the right level and maybe tighten up a loose bolt. Lower down, you'll probably have to adjust the direction of a couple of conveyor belts, but that's about it. 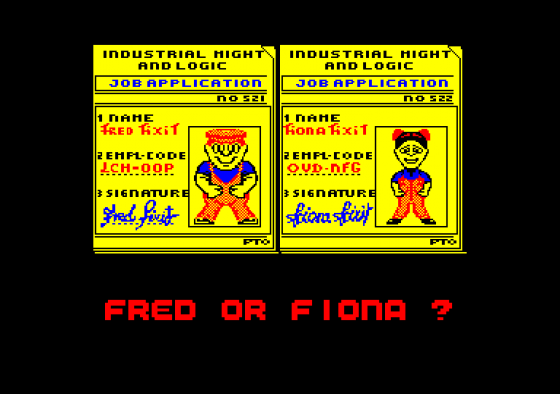 What happens is that the resin-boiler sends ingredients into a mixer which then spits out little gobs of goo which then get taken into the moulding machines (they produce the two halves of the finished toy) and the two bits are then painted, dried and glued together before going off to the quality-control machine and then off to the packaging department. Phew. Half of this is automatic, thank goodness.

Or at least, it is at first. Each level you are given a production target. Meet it, and you are given the password (fruit machine symbols) to the next level. As you advance, the production requirements get tougher, and various bits of the Beast previously under automatic control now need your attention. For example, it's not long before you're required select the paint for the dolls, and for this you need to first empty the paint vat and then fill it with the right colour paint. Not easy while you're tripping up over gremlins, keeping conveyor bolts running in the right direction and stopping your battery going flat.

It's just as well, then, that you've got a box of handy tools to help you out. As well as a spanner (which you'd expect), you get a balloon (for getting to the top of the Beast quickly), an umbrella (for getting down again), a vacuum cleaner (for sucking up the gremlins), a moth (for scoffing the little devils) and a match. These tools can also be picked up on the Beast itself, as can an extra-time bonus. 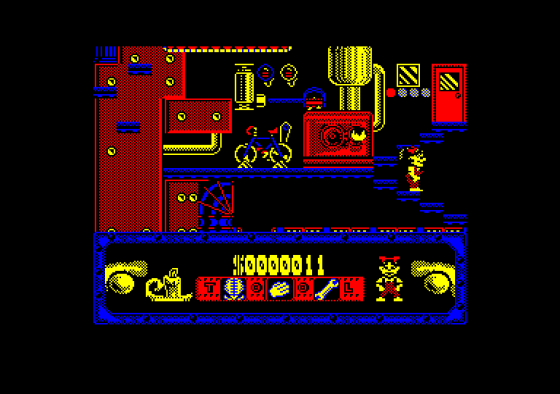 The graphics are Speccy-port-style, but they're solid enough and very colourful. Sound consists of a decent title tune and good in-game effects. These consist of warning sirens to tell you when the Beast isn't producing resin properly, and nasty klaxons for when you produce a duff doll. Very useful indeed, as it happens, because while you're watching the production process in one part of the factory, you can't see what's happening in another. You can play the part of either Fred or Fiona Fixit (no sexism in this game!) and your character is very nicely drawn and animated. Let Fred or Fiona drop too far to a platform and they sit there grimacing, dazed by their fall. They also put on a wonderful scowl when they kick gremlins out of the way.

The animation might be nice, but your character does move a tiny bit slowly. This makes the game more frustrating than it need be, since you can often see just where you want to go, and know exactly how you're going to do it, but have to wait while Fred or Fiona get their act together. It is annoying, because when things go wrong in the production process, they need fixing straight away.

The gameplay itself is quite well thought out. The extra challenge as you advance through the levels comes from larger production targets, more complication production runs and the greater complexity of operating the Beast. There are 30 levels in all, which should be enough to keep you going for yonks, because this game sure is a toughie.

Nightshift is a very good game. It looks nice, it plays well, it's original and it's none too easy. Part of the reason it's not easy is the instruction manual. Written in a humorous vein, it carries torn pages, handwritten alterations and even dried coffee rings as it simulates the Beast's operating manual. Diagrams are included to show the operation of the main components, but they frequently bear little relation to what you see on the screen, and early attempts will probably prove very frustrating as you plod around the factory kicking, switching, prodding and poking in the hope of stumbling across the right solutions.

Get past this phase, though, and you'll be hooked. Nightshift doesn't have a huge playing area, but more than makes up for it in frustration, action, puzzling and - at the end of it all - a wonderful sense of satisfaction when meet your production quota, a great game!

The problem with Nightshift is that it's so damned difficult to get into. Break that barrier, though, and you'll find a deeply challenging and maddeningly addictive game to play.

Sonics 90%
Nice tune, and decent fx that are actually extremely useful to the gameplay!

Staying Power 89%
Difficult enough to last ages... as long as you become addicted.

Overall 85%
Nightshift is tricky and challenging. It's great, but will it drive you round the bend?

Damned difficult to get into, but break that barrier, though, and you'll find a deeply challenging and maddeningly addictive game to play. 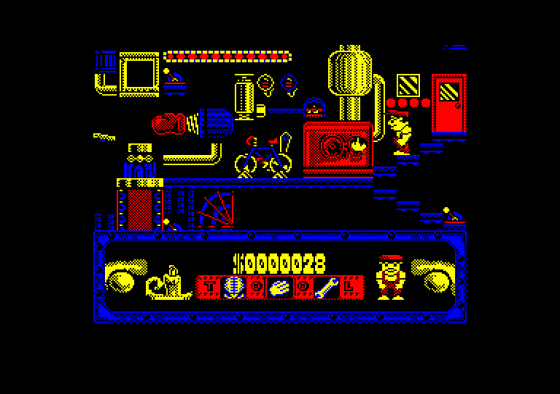