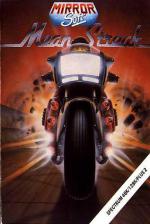 Think once, think twice, think bike - for in Mean Streak they're going to be coming after you, on this Sunday afternoon ride with a difference.

You're out there on the road, minding your own business, when a succession of computer-controlled psychopathic bikers try to bump and bore you off your two-wheeled chariot. And if that fails, they're not averse to taking a pot shot at you.

But you're not standing for that. You too can push attackers off the roadway, or get behind them and blow them away using the guns and missiles you just happen to be carrying.

But these fiendish bikers who have never passed a proficiency test in their lives aren't the only dangers lurking on the streets. Scattered across the blacktop are tin tacks to puncture tyres, rocks and oil slicks that can send you careering and make you vulnerable to an opponent' s nudge, ramps that have to be cleared, walls that can flatten a face, and gaping holes the council have forgotten. Lose control of your machine and you end up as an accident statistic with one of your three lives gone.

To avoid these odious obstacles, the bike can accelerate or slow down, be swung across the road or leap into the air. Advance warning of the problems ahead on the scrolling screen is given Defender-style by a radar screen showing a vertical view of the road section with the position of your bike and opponents displayed.

Fuel, oil, missiles and tyres are in limited supply, though there are engine-refreshment cans and missiles on the road.

There are three restart cones that can be picked up as you ride onward; should you succumb to an unwholesome end, a cone will allow you to restart from the point where you picked it up.

'At first Mean Streak looks very promising, but successive plays reveal a lack of real substance. The graphics are simple but the jerky scrolling that lets it down slightly. Here's a game requiring little in the way of instructions, and so it's easy to get into and enjoyable for a while, but I wouldn't describe it as addictive and it turns out to be a bit too frustrating - on several occasions when my player was killed off the exact cause of death was a bit dubious. Mean Streak offers some good ideas but repetitious gameplay and some slipshod programming knock it down a lot of points.'

'I was immediately taken back to the days of Spy Hunter, speeding down the city streets blasting down all and sundry. It's a pity that there seems to have been little progress since those days. I had the impression Dalali plumped for monochrome graphics and diagonally-scrolling play area just to make the game more up to date. The shoddy implementation results in inaccurate collision-detection, making the game unplayable for the most part. While the bikers are well-animated and drawn with plenty of detail, the rest of the graphics seem to have been forgotten - and they're very average.'

'Mean Streak's an odd game. It resembles virtually all the other diagonally-scrolling games in feel and difficulty of control; somehow, though, Dalali Software has succeeded in making it playable. After a few lengthy plays I'm well stuck in and probably will be for an hour or two to come. The controls are a pain - fair enough, eight moves on one joystick isn't bad, but in a panic it's frighteningly easy to jump when you want to fire a missile. Nice graphics, nice gameplay, nice presentation - overall Mean Streak is a nice game.'

The shoddy implementation results in inaccurate collision-detection, making the game unplayable for the most part.