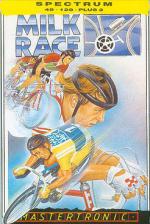 Summer sees bikers take to the roads in Britain's prestigious Milk Race. 84 entrants, you included, pedal and pant through 13 stages, displayed on a map screen, over the thousand-mile route from Newcastle-Upon-Tyne to London.

As the road scrolls along horizontally, you can move from side to side to avoid potholes, other riders and the marshal 's cruelty errant car. The bike has 12 gears; the higher the gear the faster you go, but the greater your energy loss in comparison with lower gears, especially when climbing uphill.

Gradients are indicated onscreen, and ascending steeper hills uses more energy. Complete exhaustion drops you out of the tour, but reserves can be restored by picking up milk bottles standing beside the road - pints for points, so to speak.

Hazard collisions cause time loss, with some more serious than others, and you can be eliminated altogether on time-trial stages where a specified distance must be covered in a set time.

Points are awarded for the distance travelled along each stage, with a bonus received for its completion. The winner is the cyclist who takes the lowest total time to complete the course.

'I enjoyed my first race, but the game quickly became tedious. The graphics aren't revolutionary, but they're satisfactory. It's the simplicity that's the main problem; I didn't even find it necessary to change gear down hills. If you try and get all the milk bottles you can, and make sure you stay out of the way of the other riders and the marshal's car, then you're in the clear. There's not enough content to justify even a price of £1.99.'

'The graphics are awful, the riders look like hunchbacks as they wobble along the road, the buildings in the background are cardboard cutouts; only the map of Britain on the intro screen is reasonable. Sound isn't too bad - quite a nice little tune plays on the map screen, but there's not much else. It's annoyingly hard to keep out of the many potholes, and out of the way of other riders. Milk Race didn't interest me enough to keep me playing, and though it might appeal to the younger player my advice is to steer well clear.'

'There aren't any other cycle race games on the Spectrum, so I loaded Milk Race with anticipation. Sadly, the reality was a disappointment. The inlay says keys can be redefined, but I looked high and low for an option, to no avail. It's very simple to play; it's not long before control of the cycle has been mastered and you can race against the minimal and often jerky graphics. Milk Race was enjoyable to play at first but it lacked challenge and variety, and becomes boring by its repetitiveness. The idea is good.'

Milk Race was enjoyable to play at first but it lacked challenge and variety, and becomes boring by its repetitiveness.