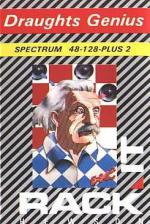 Playing draughts against a confirmed mega-genius like Einstein could be a humiliating experience. Are you man or woman enough to do it? Easy, you think - so, as you face Einstein across the draughtboard in the professor's front room (decoration by Oxfam...), the battle of two great minds begins.

But even Einstein is beatable; there are eight skill levels in this draughts challenge, one of the first releases on Hewson's new Rack-It budget label. If he's thinking too hard you can hurry him up by pressing 0, and on noticing a fatal mistake you can cancel the last move!

The crowd is breathless as everyone waits for Einstein's response. Then it's your turn to put the professor in a predicament again. If the chance arises try a multiple move, skipping like some demented leap-frogger across Albert's men and thus removing them from the board. (To make a multiple move, press the spacebar twice after moving the cursor to your target square.)

Impatient Einstein will tell you when it's your move and when it's his. And on winning or losing, you are either applauded by the genius or ridiculed for your pea-brained incompetence.

'Games seem to be head back to the past, what with Breakout variants, Battleships and now draughts - where has originality gone? Still, Draughts Genius has everything you could possibly ask of a game based on draughts. The graphics are reasonable, with some nice attention to detail, and the computer offers a mean game - but remember you can buy a draughts set for about this price and the board can double as a chessboard!'

'Don't think this is just another boring draughts game - it's full of cute little animated sequences (like all the programming team dancing around the piano at the start, and the things Einstein does when he wins and loses). Colour is used well and the background on the main screen is fantastic. Underneath the fancy stuff there's a first-class draughts game with useful skill levels, and even if you're no good at draughts you can use the cheats to win in Draughts Genius!'

'Draughts Genius is good fun, and a worthwhile buy at not much more than a draughts set. The one-moveback trick is a good cheat, and Einstein is quite amusingly animated. This is worth getting, even though I can't beat Level 6.'

Underneath all the fancy stuff, there's a first-class draughts game with useful skill levels... Even if you're no good at draughts you can use the cheats to win in Draughts Genius!