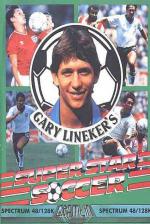 Gary Lineker's Super Star Soccer attempts to combine building up a skilful team with actually playing the games. Two genres in the one game, with you trading and recruiting your players, as well as taking part in League and Cup matches.

No surprise that, with so many elements incorporated, both areas are treated rather superficially.

When playing the fixtures, you can choose whether to control both your centre-forward and goalkeeper, either or neither. Also check you've selected a suitable match length time - because when it says 'real time', it means it, and it'll take a long time if each match is 90 minutes long.

The joystick/keyboard options for passing, shooting and generally staying the match, are unnecessarily cumbersome and frequently do not translate into the ball movements that you intended.

To pass, the eight joystick directions represent your team mate's positions, rather than the exact position you wish to pass to - and it appears to make little difference anyway since your colleagues will often just stand there and watch the ball float past, millimetres from their feet. To shoot at goal, you must keep a close look at an on-screen indicator which fluctuates back and forth, determining the direction of your shot. Frankly, it doesn't appear to matter - I sailed into Division 2 from the 4th in straight seasons, without ever feeling I'd mastered the playing controls properly.

The game seems 10 nave cheerful disregard for football rules. You can score direct from throw-ins. Preston North End repeatedly barged my goalkeeper, knocked the ball out of his hands in order to score, and the keepers, on several occasions, took goal kicks from inside the net. Surely the game's sponsor, who has never been booked in his life, would have something to say about all this?

On-field the computer-generated ball play is so quirky that the team seemed to do just as well whether the centre forward I was controlling was haring up and down the field like an all-parts-intact Bryan Robson, or standing on the sidelines.

The Lineker name should ensure that it will sell well, but Match Day II beats it.

Football game which gives you both simulation and strategy. Somehow both are treated a tad superficially.

Football game which gives you both simulation and strategy. Somehow both are treated a tad superficially.