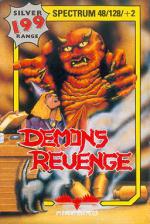 If Demon's Revenge had been released three years ago, we'd probably all be swooning with amazement. However, times have moved on, and while it doesn't exactly look out of date, its concept and implementation have a distinctly familiar look to them.

Set in the bowels of a stone-walled castle, you play Merlin Junior, collecting up pieces of a talisman, collecting spells and objects and using them at appropriate junctures, shooting at skeletal and ghoulish nasties which rattle and float around the various rooms.

Presentation is the very familiar single-colour-on-black, pseudo 3-D perspective, flip from screen to screen view. There are lots of objects to pick up and use, lots of baddies to do business with, and it's very playable. In fact it's a very neat, pleasing game, but not wildly exciting. It reminds me of the Hewson magic 'n' blasting games like Wizardry. It's cheap n' cheerful but it's quality budget stuff and could even make it to the charts.