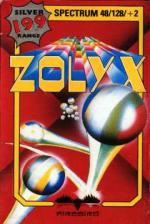 Zolyx is a new version of an ancient game whose name I forget. On the screen is a rectangular grid. You control a ball, with which you must traverse the grid making shapes and filling up as much of the screen as possible. You'll be hampered by an increasing number of smaller balls which bounce inside the rectangle and kill you and your connecting lines if they hit an incomplete crossing; and a larger blob which chases you round the perimeter. In addition, if you try to make your connecting lines too long, a third ball comes up behind you to zap you. Claim over 75 per cent of the screen as 'yours' by boxing it in and you go to the next level exactly the same, but with an extra small ball boinging inside the grid.

It's dead simple to get the hang of, not easy to become consistently good at, and is presented with utterly basic screen displays and a few buzzy sound effects. The astonishing thing is it's astoundingly addictive strange... but true.

Nothing spectacular in the graphics or sound department, but good gameplay. An old, old favourite.

Nothing spectacular in the graphics or sound department, but good gameplay. An old, old favourite.