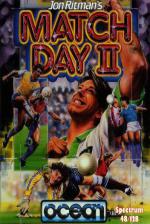 Since Match Day is generally considered to be the best example of a football playing (as opposed to football management) game on the Spectrum, there's been considerable pre-launch interest in the follow-up Match Day II.

What have Ritman and Drummond done to improve on the original? The answer is, to a large extent, they've complicated it.

The basis of the game works in much the same way. Each team has seven players. You control one member of your team at any one time, usually the man nearest the ball (technically 'its the player in the best position to get the ball'). Either the computer or another person controls the opposing team.

And matches can be five, ten or 15 minutes long.

The complications arise in the vast number of extra feature incorporated into Match Day II. Your controllable player is denoted by a sort of variable bar code on top of his head - the kickometer. When it's stretched out he'll kick the ball a long way; one bar only and it'll be a short pass. If the kickometer is doubling back on itself, he'll do one of those backheel shots.

Getting the hang of the kickometer often makes the difference between being thrashed 7-0, and gaining a respectable result.

Realism has also been added in the shape of tackling and shoulder barging your opponents, volleys as well as floor passes. Throw-ins, corners and goal kicks are of course catered for. No penalties however, which, judging by the nature of the goalmouth scrambles, is just as well.

Aside from the play, there are options galore for determining your playing tacttics.. You can set the kickometer at a fixed or less flexible level: all hard shots for example. You can choose whether to place most of your players in your own or your opponent's half of the field, whether to take on responsibility for your goalkeeper efforts or not, or how good you wish the computer to be flexibility of Match Day II, it's a pity that the playing screens themselves aren't always very clear. The teams are white versus yellow, but in tackles and crowded goalmouths all become yellow, thanks to the Spectrum's attribute system.

Another snag is if a long ball is kicked(by either team), your man with the kickometer on his head may well be off-screen - it's thus impossible to intercept the ball until the screen scrolls and you can spot him.

That said, the extra features, both in play and pre-match options: add greatly to the variety of play and tactics available from the original. If you've had Match Day I for a while now. and have mastered the playing technique, Match Day II will revitalise your interest.

I still prefer the original Match Day though...