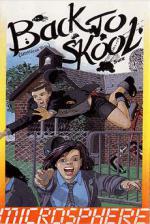 ERIC'S BACK again for a new term at school, and the catapult bullets are flying as thick as ever. In Skooldaze, Eric had to steal his rotten report from the Headmaster's safe. Now he's had all summer to forge a new, glowing version. The problem is, how to get it back in the safe again.

Over the break, there've been a few changes at school. The same old masters, Mr Wacker, Mr Withit, Mr Rockitt, and doddery old Mr Creek still dish out the lines as angrily as ever, but the school has been considerably enlarged. There's a girls' school on the other side of the playground, and Eric's got a girlfriend of his own.

And as well as the catapults and good old fistfights, Eric has access to stink bombs and water pistols to create his own special mayhem. All his old friends are there, such as Angelface the bully and Einstein the sneaky swot, and it's as big a riot as the original Skooldaze.

The task of getting the report back in the safe would be impossible if it wasn't for Eric's big brother, who has thoughtfully provided notes on how he achieved the same feat two years ago. It seems you've got to get the masters drunk on the Headmistress' private sherry in order to reveal the combination for the science storeroom where the frogs are kept.

"The gurls' hedmistris hates frogs" says Eric's brother. So nobble the old bat with the frog and... ah, but you can't do that unless you have the bike, and the bike's chained to the conker tree, so you'll need to get Mr Wacker to open a window by letting off a stinkbomb...

The graphics are fabulous, still the same cartoon-like boys and masters lurking in the corridors, the same melee at dinner, the same scramble for seats in overcrowded classrooms. But there's more variety on top of that - a much larger playing area, horrible little girls with hockey sticks, an impressive array of impedimenta in Mr Rockitt's laboratory, desks that open now to reveal water pistols and stink bombs, and so on.

Although it's extremely difficult to get far into the quest, that won't stop you having a good time. It's fun just trying to stay out of trouble - if you get ten thousand lines you're expelled, and what with the fighting and time- tables to be reckoned with, you're hard enough pressed just to get to your History lesson on time, or make it back to assembly from the forbidden classrooms of the girls' school. Microsphere has taken pity on Eric though - he might persuade his girlfriend to help him out with the lines.

Meanwhile there's Einstein's incredible knowledge of dates to envy, Angelface's knockout fists to avoid, and lots of incidental mayhem to raise a laugh from spectators as well as players.

Although it's extremely difficult to get far into the quest, that won't stop you having a good time.