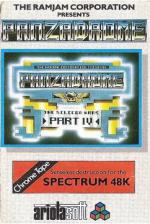 An island full of robot tanks? What do they do there? Who do they shoot at? You of course - since it's your job to destroy all the power generators on the island.

In order to do that you have a tank of your own - the Hell-Tek. It moves in eight directions and fires shells. If all that sounds suspiciously like one of those old tank attack games where you negotiate a maze of buildings while chasing your opponent, go to the top of the class. There are, however, a number of differences which make Panzadrome about the best tank game of that type we've ever seen.

The most important feature is that your tank isn't fully built at the start. You have to explore the landscape to collect tracks, mortars, mines, a special storm turret, and Polycrete - a substance which fills in craters.

It is most important to find the Polycrete first, as without it you can soon get boxed in - many routes in the city are only one tank in width, and if they get blocked, you'll never escape.

The graphics are very pleasing, although the only concession to 3D effects is a shadow from the walls of the city. It's an overhead view, and scrolls smoothly over 64 screens.

Combat with the robot tanks should be avoided in preference for finding safe routes - but your first task is to locate the factories where you can obtain extra parts. That is a very tough proposition indeed. We won't help you by explaining what a factory or generator looks like - that's something else you must discover.

That said, it's also very addictive - after a bit you can see how to achieve your goal but putting that plan into practice is a killer.

Panzadrome is Ariolasoft's first game designed specifically for the Spectrum by the Ramjam programming team - in the past the company has stuck to conversions of American originals which tended to suffer on the Sinclair machine. Panzadrome is a welcome sign of a change in policy, and well worth buying if you want a long-term challenge with plenty of violent action.

Well worth buying if you want a long-term challenge with plenty of violent action.