Published in The Micro User 1.08 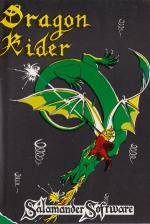 Just looking at this game's packaging made me want to buy it. It's a lovely little plastic case just larger than the cassette with an attractive picture of a dragon on the outside.

But, as my mother always used to say, never mind the packaging, take a look what's inside. Well I have, and it lives up to expectations.

The theme of Dragon Rider is that you're on a planet threatened by showers of alien worms falling from the sky. If you've read any of Anne McCaffrey's excellent science fiction books you'll know where the idea came from.

Your aim is to destroy the worms before they reach the ground, and to this end you use your trusty dragon. As you might expect you can scorch the worms with the dragon's breath, but this uses up rather a lot of energy. Alternatively you can use your laser lance which has less effect but saves energy.

When you destroy one cluster of the falling pests another, more testing one arrives.

Yes, I know what you're thinking - and you're right, it is another variant of Space Invaders - but it does have its original points.

Your laser base has become a dragon which actually flies up into the showers.

Another difference is that you can't fire at the worms from below, you have to move so that you can shoot at them from the side. This adds a whole new dimension.

And you have to watch the energy level of your Dragon, as indicated by the poor beast's colour.

Hits from the worms, using your weapons and, in the higher levels, the energy used in manoeuvring, all deplete your reserves.

To avoid crashing you have to eat one of the firestones found on the valley floor.

All this makes the game quite different, and its adequate instructions and easily-used keyboard controls make it simple to learn.

The graphics are high quality and the whole idea works well. Don't be foeled by the seeming lack of speed at first. You'll soon find it goes fast enough!

If you're looking for a zap-pow game that has all the attractions of Space Invaders plus a lot more then Dragon Rider deserves serious consideration.

It's different and it's fun.

Different and fun... If you're looking for a zap-pow game that has all the attractions of Space Invaders plus a lot more then Dragon Rider deserves serious consideration.