Published in The Micro User 2.01 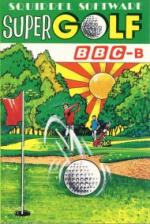 Play A Bit Below Par - But Not The Program

I've never played golf and, having had a go at Squirrel Software's game Supergolf, it's unlikely that I ever will.

Not that it's a bad game, in fact it's very good. For your money you get an 18 hole course, a score card and a set of golf clubs.

Also, if you're as bad at it as me, you get humiliated into the bargain. You see, no matter which club I choose from the set of nine irons, I can't get it right.

I've tried all the different strengths of swing (from one to 99) and I still can't judge it.

My ball has a terrible affinity for the bunkers or, even worse, water. And my putting is agonising to watch.

Nor does it improve matters when I get a scorecard at the end of each hole telling me how far below par I am. It's an interesting game for up to four players, well conceived and well worth playing.

Yet, terrible though I was at it, Supergolf remained fun and left me wanting to play again. Enough said?

Terrible though I was at it, Supergolf remained fun and left me wanting to play again.
Logout