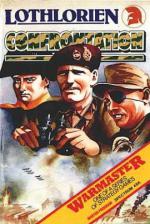 A couple of months ao we ran a feature on Lothionen, who produce this turkey; in the piece the complained bitterly about the fact that they always had bad reviews. Frankly, looking at this, i'm not surprised. Confrontation is supposedly their classic wargame, and is the master program for a whole series of wargame scenarios. The game is above the Argus level at any rate: but it suffers from a problem which typifies wtually all strategy games - the presentation of the map and units is diabolical. In the Lothiorien interview, one of the directors, Roger Lees, said “you have to make sure that the graphics don't get in the way of playing the game”. Or lack of them, Roger? The only way to gain any kind of overall view of what's happening is to make a note of where everything is each turn, because an enemy unit only appears as itself once you've moved right up next to it - which can be a little bit late, Otherwise it's all guesswork, which doesn't sound much like strategy to me. Despite a fair variety of unit types, a reasonable terrain system, and a generous scenario-builder p'ogram, the game still fails because of this guesswork or paperwork' problem.

Despite a fair variety of unit types, a reasonable terrain system, and a generous scenario-builder program, the game still fails because progress is simply due to guesswork.