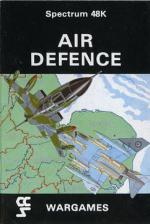 What sort of name is Almart anyway? Who are these people? Air Defence is yet another game published by CCS if that sounds admonishing it isn't, it's actually praise. I cant see myself quite how CCS manage to make any money, producing (as they do) solely minority interest products; but they obviously do, because the games are improving all the time see the Nato Alert review.

Air Defence is another non-nuclear wargame (well, I assume it's non-nuclear because targets suffering bomb damage recover after a set number of turns and it doesn't say anywhere that each turn is twenty five years long).

What happens in the game is that you are charged with defending ten targets six airfields, one radar station, one naval installation, a factory and your HQ. Your aircraft operate from the airfields, and all the other targets are important too radar for spotting incoming raids, the factory for re-arming your aircraft, and the navy because they have missiles they can use to assist you. Lose your HQ and you lose the game.

The enemy sends twenty bomber raids over to destroy specific targets, and you have to shoot them down with your ten fighter squadrons, assisted by two airborne tankers and two AWACS (early warning radar) aircraft. Sound simple? It isn't.

Even with your two AWACS in forward deployment, your radar cover still doesn't cover the map, so you can't see all the raids coming in, until sometimes they're right on top of you. The bomber raids have fighter escorts as well, and you need numerical superiority to defeat them and destroy the raid. Your fighters only have limited supplies of fuel, and using reheat (to fly faster) uses it up much faster; you can refuel in flight, or you may have to return to base.

Weapons are also finite, and when they have run low (after three or four engagements) the squadron must return to base to re-arm which takes four games turns (on the ground and usually another two or three to get there). Any raids not destroyed will return later in the game with a new load of bombs.

Each fighter squadron starts with twelve planes, which tend to get depleted in engagements and can't be replaced. This means that returning raids could well have more fighters than any of your squadrons, so knocking them down would be a problem.

The fairly complicated decision making in the game is greatly heightened by the real-time element you have to make your choices from a menu, which is only displayed for around five seconds. You can pause the game and have a ponder, but each release takes up about half a second, so you really only make about eight to ten moves in every turn, and using one of those moves on a 'pause' may be very inconvenient at some points in the game.

Once you have selected a course of action from the menu, for example, 'Allocate', the clock stops while you select which squadron, which raid it is to be allocated to, and whether or not you want to re-heat.. As your airfields get damaged, so you have to switch the squadrons' bases about, and so on. Once sent off to shoot down a particular raid, a squadron will carry on until they either succeed, or fail you change their orders (obvious really). This is a subtle game, and excellent as an exercise in tactics; the lightning-fast decision-making required to make the most of each 'go ' (you alternate with the computer) compensates for the relatively small number of units you have to play with.

One gripe (as always) please, please, please CCS can you get ride of those horrible map co-ordinates for position selecting. Why can't we have a cursor? I can't see that it would be much more expensive in terms of memory, especially not since this is largely a machine code game.

PS Those of you who've been waiting with baited breath to see whether my roof will fall in or not, will have to wait until next month. I'm afraid I'm going on holiday. Yippee! So I haven't got time to write any more now.

A subtle game, and excellent as an exercise in tactics.