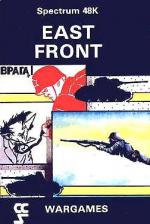 'Oh no!' I thought as I pulled this one out. Not another innocent-looking CCS game with an inlay card that folds out to be about eight feet long. But yes, my predictions proved to be entirely right again. I was interested to see what this would be like because it advertises itself as being the game of 'Tactical Warfare on the Russian Front, 1941-45', and as a general rule, I prefer closer tactical games to expansive strategy ones. However, in this particular case. . . . The program is mostly in BASIC, which is a bad start, and the map generation routine is just risible. the game is supposedly very flexible in terms of the various different terrain and weather conditions you can impose, but one of the problems is that the average Russian landscape consists of a couple of acres of snow, a few pine trees, an empty Vodka bottle and a food queue. Translated onto a computer screen this tends to give a square or two of action in a sea of whiteness.

Apparently Cruise missiles have had a number of problems coping with the Russian landscape - all those CIA agents who proudly lost their lives to bring back accurate OS maps of even the most obscure parts of the USSR so that the right information could be fed into the control systems of cruise missiles, would no doubt be overjoyed to learn that when the whole lot gets blanketed in thirty feet of snow, as so often happens in Russian winters, the things begin to lose their bearings and end up in the middle of Spitsbergen. So, if February is getting you down - rejoice! Think of it as the closed season) Which is totally by-the-by.

The units are represented on screen by letters (ABC order) in boxes, and they flash (wow!) when it's their go. This is a two-player game, which I don't personally mind, but a lot of folks do, and it also requires the players not to watch each other at certain points. I can't really say a lot in East Front's favour, except that the author obviously knows his period, because there are loads of peculiar different units to choose from.

I can't really say a lot in East Front's favour, except that the author obviously knows his period, because there are loads of peculiar different units to choose from.