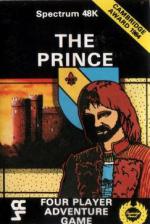 The 1984 Cambridge Award Winner: This is a very complex program for four players which actually demands quite a lot of thought from the participants. It is reminiscent of the board game Diplomacy' in that it provides a vast amount of scope for inter-player negotiations. The game is based on Machiavelli's classic chronicle of Renaissance intrigue ('The Prince') and the task is to retrieve a secret object and word and present them to the Prince in order to become his thief adviser. Each of the players has a character on the screen who holds a certain measure of power; for example, Porcus the Merchant can lend money to other characters, while Brother Ambrose can dispense grace. The Prince will refuse to see anyone who has too many sins outstanding, and ft's well nigh impossible to avoid committing the occasional sin along the way, such as sending out your henchman to 'hit' another player, or even stealing the objects themselves. Each player has a spy and a thug to help him collect information and hamper his rivals' efforts, but as there is only an initial selection of six of each two, the chances of your men being double agents is very high.

The other players are required to leave the room while you take your turn on the keyboard, and you can leave phony messages around the castle for them, steal their ladders as well as all sorts of other devious tricks. Also, the opportunities for off-screen disinformation are enormous. But one of the problems with the game is that I feel it's unreasonable to expect the players to maintain the pretence and secrecy for the amount of time it takes to play. One feature of the game, for Instance, is being rendered 'incommunicado' at certain points, which means that you can't talk to the other players off-screen. I have my doubts as to whether this is particularly practical. Also, the command structure is only likely to be understood by hardened adventure freaks.

But these are only minor quibbles. The graphics and character set are very neat and very fast, and the basic strength of the game as a multi-player experience should not be missed. I haven't really had time to get to grips with The Prince as yet because of its great complexity, not to mention the difficulty of getting four players together at the same time. But saying that, I think this one should see me through most of the winter.

The graphics and character set are very neat and very fast, and the basic strength of the game as a multi-player experience should not be missed.