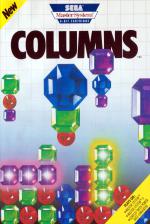 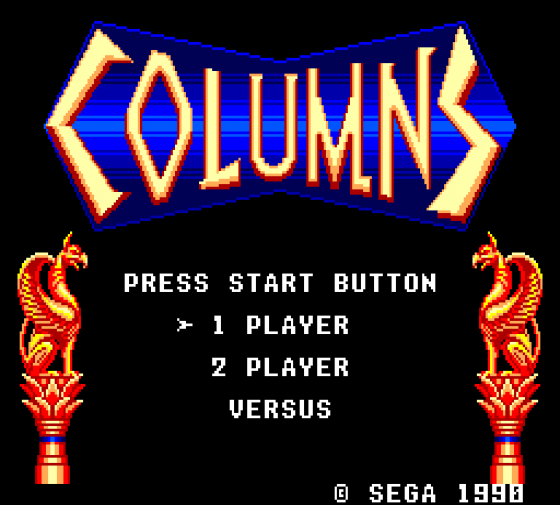 If I was to say that this was a load of blocks, I'd probably get the sack [You're right, so don't! - Ed]. But that's essentially what Columns is all about.

One or two players (playing either head-to-head or alternately) have to shuffle around groups of three blocks which are falling into a well, a la Tetris, so that the shapes or colours on the blocks (you can change them from gems to dice to fruit) match up in lines of three or more! Easy, eh? Well, not when they start to get faster and faster, it isn't...

Once a line of three or more matching shapes is made, it vanishes, allowing the blocks above it to fall down a level and perhaps form more lines. But don't let the well fill up or the game is over!

Having seen just about every sort of Tetris-alike there is, I was beginning to feel that the genre was at last becoming stale. Then Columns appears, and completely throws that idea right out of the window!

From first impressions, you might not think that this could possibly be in the slightest bit interesting - the graphics are certainly nothing to shout about, with the possible exception of the scrolling road background, and the sound is a hypnotic little jingle that plinks away in the background.

But, as you'd expect from a game like this, the playability shines through, and makes Columns one hell of an addictive little number. If puzzle games are of any interest to you, then take a gander at this - you'll probably end up hooked!

As you'd expect from a game like this, the playability shines through, and makes Columns one hell of an addictive little number. 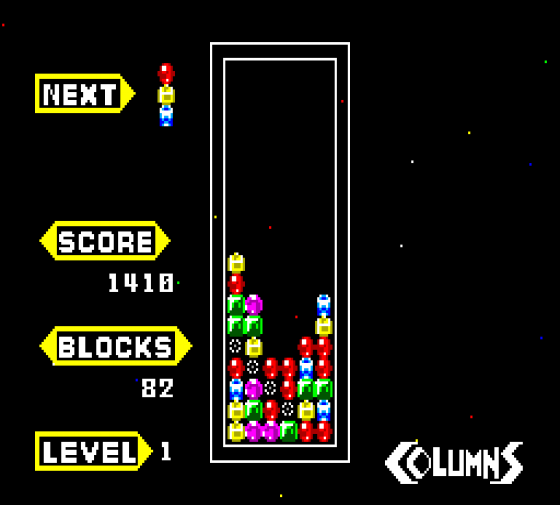