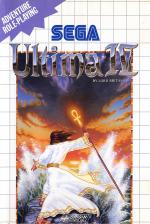 Once again, you have been mysteriously summoned to the realm of Britannia, this time to follow the Quest For The Avatar, a search for a new vision and way of life, which will lead the people of Britannia from the Age of Darkness into the Age of Light. In order to do this, you must become enlightened in all of the Eight Virtues of the Avatar, which are buried deep in the hearts of the people and lands of Britannia.

If folk you come across are on a level with your beliefs, you can ask them to join your party of up to eight adventurers. These brave souls will be loyal to you as long as long as you keep to your beliefs, but betray them, and these Free Companions will leave you to your fate alone. Buying and trading is possible in one of Britannia's many towns, as well as staying in inns (a lot less hazardous than sleeping under the stars, open to all sorts of attacks). You can also cast spells, if you have the right ingredients, but these have to be mixed together first before the spell can be cast.

All of Britannia, its inhabitants and towns are stored on a four-megabit cartridge, with battery-backed RAM so you can save your party to the cart at any time, and believe me, you'll need to.

I was expecting Ultima IV to be somewhat of a let-down as a Sega title, but fortunately my fears have been well and truly quashed. Okay, the graphics and sound are a bit simplistic, but this doesn't detract from the strong story which grabs you by the throat and refuses to let go.

The introduction is very pretty, but once the game gets underway, the screen switches to the familiar top-down view. Wandering around finding villages and towns is fun, but it drags slightly if you're stuck in a wood and can't quite find your way, and it's an all-too-familiar sight to end up back in Lord British's castle after being jumped by an attacking skeleton warrior.

The battery-backed RAM is essential for saving your location every once in a while, and it means you don't have to sit in front of your Sega round the clock for about three weeks on end to complete it. Role-players, check it out.

Wandering around finding villages and towns is fun, but it drags slightly if you're stuck in a wood and can't quite find your way.