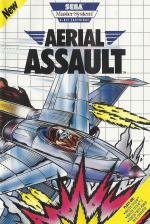 Now the doo-doo's really hit the fan. A mysterious marauding military militia (phew!) has launched a devastating attack on your homeland, destroying all but one of your nation's top hi-tech fighter aircraft. You, being the coolest pilot around (so cool that Tom Cruise looks like a wet halibut in comparison), must fly this amazing beast into the heart of the enemy's defences, and blow the crap out of everything in sight!

Flying from left to right along horizontally scrolling landscapes, you destroy enemy aircraft and ground bunkers and knock out spinning jets, which leave behind a myriad of power-ups, including three, five and seven-way fire, bombs, shrapnel bombs, extra lives and the like.

Reach the end of the level and a big, nasty-looking end-of-level transport will do its utmost to blow you out of the sky before you do the same to it. Destroy it, and you move on to the next level, to face even more death-dealing disasters and dish out more devastating destruction (try saying that after a few pints of Old Scrote's Best Brew).

Another horizontally scrolling shoot-'em-up? Well, actually, this is no bad thing, as the Sega is surprisingly short of games of this ilk and Aerial Assault fills the gap rather well. Bearing a remarkable resemblance to P-47 in many respects (the second sunset level is a very similar, Aerial Assault looks at first to be a rather naff clone, but behind the small, peculiar-looking graphics and annoying tune lies a game of surprising addictiveness, something that few blast-'em games seem to achieve.

The difficulty seems to be set just right, so experienced and novice blasters alike can dive straight into the action. Thankfully, losing a life (and therefore losing all the extra weapons you've picked up) doesn't necessarily mean 'game over', as building up firepower again is not as arduous a task as with many similar games.

If you liked P-47, and want an enjoyable blast on your Sega, you could do a whole lot worse than take a look at this. Recommended.

An enjoyable enough blast. The difficulty seems to be set just right, so experienced and novice blasters alike can dive straight into the action.