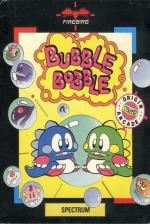 So I was most put out to discover that the wretched thing is, as Firebird has been telling us for simply ages, incredibly addictive.

Not that it's any excuse for the nauseating cuteness of the whole thing. I mean, the idea of playing a bubble-blowing brontosaurus is enough to make you lose your beef an' onion Crispy Pancakes straight off.

What makes BB so addictive and, if we're going to be perfectly honest here chaps, so damned good, is its simplicity. All you gotta do is blow bubbles, burst 'em and eat food. What could be simpler? What could be more dull? But it ain't dull. It's dead good y'see.

It's a bit like Pac Man! You play the bottom-waggling bronto of uncertain sex, and, for no apparent reason (I like these games with no plots, don't you?) it's up to you to clear innumerable screeens of enemies. Once you've cleared one level, up pops the next, right on number 80!!

Each screen has little ledges to jump on. You can jump up through the ledges, and land in the middle, but you've got to jump off the end. So as the screens get more complex, with little boxed in bits, moving round the place gets harder. And there are more enemies to bump off and time starts to run out. There's a lot of frantic bubble blowing going on.

Because bubbles are what it's all about. What you have to do is trap each enemy in a bubble, head butt said bubble, and watch the now deceased creature fly about all over the screen like a rapidly deflating balloon. When he lands, he'll turn into a choice piece of grub, such as a cake or burger with dill pickle. Eat the grub and watch the points mount up.

And that's more or less it. There are a few finer things in the game, such as varying villains, bonus points and gigantic apples wot drop on yer 'ead.

Villains come cleverly disguised as clockwork skull efforts, sort of evil looking birds, and a fishy thing which I gather is the ring leader of the lot. You get a bonus screen of purple onions every now and then, too, and land a gemstone, or the aforementioned giant apple, and your score will take a gentle upward tilt.

Oh, and should you see a bubble with water in it, burst it, and you'll be caught in a fast-flowing ride across the screen. Sort of brontosaurus in a boat job really. Might take you to where you want to go, then again, might not.

Coupled with this there's a cute (quelle a surprise) soundtrack that you'll enjoy for about two minutes, and then turn off in exasperation. Very clever it is, but also incredibly infuriating.

There's not much more to say about Bubble Bobble, except that I still dislike the idea of it, but I do still need to get to level 10 next time around.