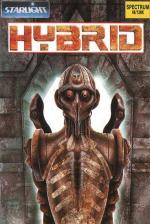 There are quite a lot of games quite a bit like Hybrid. I s'pose that's why Starlight decided to call it what they did...

Here's the plot: mankind's big hope of saving itself from eternal tyranny and misery is not, in fact, Col Oliver North - but you. Yep, you get to control the three robots that will save the world.

Inside a high security gaol live four horribly dangerous aliens. You need to kill them. In order to do this you need to move your three specialised robots to one of four special locations within the gaol where they can unite to do battle.

Getting the three robots through to the 'join-up' cells is no easy matter since the gaol area is simply teeming with laser defences, assorted aliens, cannons, impassable energy fields and lots of other things that make bleeping noises.

In some places the way is blocked to all but the smallest robot, in other areas only the biggest robot can deal with the more fiendish defensive systems.

Playing the game is therefore partly a matter of judging which robot to use when and then working your way through the gaol blasting and dodging. Each robot has separate levels of energy and fire power which may be augmented by passing through special squares in the gaol. Should one robot run out of steam it is possible to transfer energy between robots and revitalise it.

It's not a bad mixture of arcade and strategy but it doesn't look very spectacular - there's a squarish look to the playing screens, relatively unexciting designs for the robots (which do however move quite smoothly) and the various sections of the gaol all look pretty much the same. True there isn't much attribute clash but then you'd hardly expect it on a game with shapes as essentially basic as this.

If every there was a case for a mid-price game this is it. It isn't very original, it doesn't look spectacular, but it has quite a large playing area and could be fun for those who get pleasure out of lengthy mapping exercises.

They have more patience than I, though!

It isn't very original, it doesn't look spectacular, but it has quite a large playing area and could be fun for those who get pleasure out of lengthy mapping exercises. They have more patience than I, though!