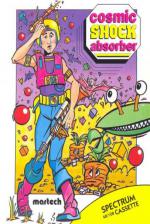 "You are Cosmic Shock Absorber, Saviour of the Universe." At least, that's who you are according to Martech.

Not another alien-zapping, running-out of time, against all odds mission? Well, almost. There is a slight twist to Cosmic Shock Absorber, but more of that in a sec.

Although you might not think so from the way the screen fails to move, you are moving through time and space. And as the aliens appear on your screen, hold them on your horizon and Fire continually. Not easy, since one laser beam seems to take about half a dozen blasts to get it on its way. It seemed to be more a matter of luck rather than judgement.

So there you are, in the trusty ol' space-craft, keeping the aliens on the horizon and massacring them as they come, progressing on to the next level to massacre some more, making your way towards the source of life itself - the interstellar Lake of Protozoic Slime (and why not?) when all of a sudden, for no apparent reason, your screen goes blank or your guns fail!

What is this? Well, it's to be expected really, since the trusty ol' CZ Neutrozapper (oh please) is not as trusty as you thought, and is in dire need of servicing. So off you go, into the Repair Mode, to carry out the necessary replacements before you get destroyed.

But (and here come the twist folks) guess who's forgotten to bring the instruction Manual with them, guess who can't remember how to operate the Phasering iron? Personally I'd have thought that when asked to pop out and save the Universe, if you know your ship is a bit on the dodgy side, the first thing that you're going to reach for is the Repair Instruction Manual.

Once in Repair Mode, you're given five seconds to study the complete circuit board before it blows up and holes appear in it. It's a kind of memory test - now you see it, now you don't. You have a further fifty seconds to fix it and you don't know how to get the right coloured symbol in the board and it's not too long before you've blown yourself to Kingdom Come.

The graphics generally are nothing to write home about. Level 1's aliens take the form of pretty uninspiring UDG blobs. Level 2 treats you to some almost convincing X-Wing fighters. But Level 3 had me slightly puzzled. I am told that the strange flapping, floating, flying things are, in fact, gliders, but they looked more like inter-galactic bats.

The real test is working out how to fix the components board, and after that, actually managing it in the time allowed. But I couldn't get too excited about that.

Mediocre space adventure stuff. Not taxing by any means, and unlikely to keep you hooked for more than a few plays.

Mediocre space adventure stuff. Not taxing by any means, and unlikely to keep you hooked for more than a few plays.