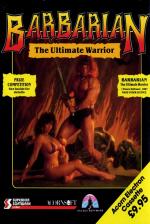 My, it's been a couple of busy months for programmer Dylan, hasn't it? Firstly, last month's comedy arcade adventure Spycat; this month, the savagery of Barbarian and yet another mystery conversion coming from Superior soon. As you'd expect, The Arcade has a good tip on the identity of this mystery man - the usual fiver will keep my mouth shut!

Now I could understand these rush releases from Superior if the Dylan games were outstanding, but I find them only competent - the mystery, for me, is what is happening up there at Superior. Game after game has been talked up to the press, from last autumn onwards, but all we get to see is other stuff apparently jumping the queue. Must mean something.

Anyway - this month it's sword and sorcery time. Conan the Barbarian - lots of gore - half-naked men with broadswords flashing (and matching steroid problems - Ed). Half-naked men? Excuse me - the noticeable thing about this game is the packaging with half-naked Page 3 model Maria Whittaker revealing the prize(s) for the victor.

Cor, what a sizzler, eh fellas? Not, not really ['Ere, what about the mamalian protuberences? Oops sorry, let's get out of crass mode - Ed]. You must be aware of the controversy in the computer press about the advertising and packaging for this game (and now Vixen as well! See last month's Back Page for the hot poop) - shock horror time. Innocent young games players exposed to the ample charms of Ms. Whittaker - isn't it dreadful? Even our esteemed companion on the newsstands Acorn User has banned the advertising, apparently.

What a lot of fuss about nothing! Apart from the self-evident truth that Superior are merely using the original Palace advertising and packaging, it's all a bit hysterical. So, there's a girl with not many clothes on. So what? Are you all so starved of such sights that you'll rush out and buy the game - wouldn't it be cheaper to buy The Sun or The Star? No, what is sickening is the hypocrisy that equates a girl in a bikini with "the end of civilisation as we know it" and ignores the violence in the game - far more worrying in that the aim is to chop your opponent's head off!

Of course, it's easy in all of this to forget the game itself. As a C64 conversion it's competent - resembling The Way Of The Exploding Fist in many ways. Given that you practise your deadly moves, you're faced in the game itself with an opponent (friend or computer) armed, as are you, with a sword. In a reasonably-sized window on screen you have to chop hell out of him, whilst avoiding his deadly cuts and thrusts. That's it - nothing astounding, nothing exceptionally bad.

The gameplay is okay - attacking and blocking moves are quite well animated but a defensive roll across the screen looks really dumb and when both fighters are in close then their legs do a kind of demented dance - not very convincing for such macho brutes. As is usual in these games, there's a choice of about 16 moves depending on whether you press the fire button when directing the joystick - head butts, defensive blocks, moving forward, etc, etc.

There are some nice touches - a mini monster appears at the end of each combat to drag off the vanquished barbarian and, if the hype is true, at the end of the game there is a touching reunion with your beloved - the afore-mentioned semi-nude.

At the end of the day, it's alright. I can't get any more excited than that but, in the welter of publicity about naked flesh, I suspect my words will fall on stony ground. A shame - it's all a distraction from the game and is bound to alienate girls from computer keyboards even more. It's perfectly possible to write about or illustrate the sword and sorcery genre without the obligatory bimbo - can I point you in the direction of the excellent Kane stories by my sometime drinking pal Karl Edward Wagner? Assuming that the market is composed solely of adolescent males does nobody any favours - least of all Maria Whittaker. [Um, Dave, Kane is also a "spanking" mag on restricted sale in some of the less seedy shops in Soho. Not that we read it, mind! - Ed]

A mini monster appears at the end of each combat to drag off the vanquished barbarian.