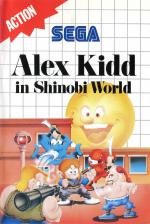 Alex Kidd is back. The thing is though he's not just your ordinary big-eared leapin', punchin' sort of hero. This time he's... a ninja!

The problem is that his girl has been kidnapped by the evil Dark Ninja (boo!). However, the Guardian of Light, who defeated the dark one 10,000 years ago, has bestowed Alex with the powers of Ninjitsu. So off he sets, sword in hand, to travel through Shinobi World, and dish out some seriously heavy punishment to the Dark Ninja and his cronies.

Alex has four energy points, and contact with a baddie knocks one of these off. Help is at hand, however, in the form of chests which lie scattered around this landscape. Open these and you'll find either an extra energy up, such as extra jumping abilities and weapons like extended sword and shuriken stars.

Shinobi World is split up into four levels, each consisting of three sub levels which are all guarded by a big, bad, boss monster. Destroy this guy and you move onto the next level. Fail, however, and your girl's sushi.

This game is brill! A combination of Alex Kidd In Miracle World and Shinobi (both really good Sega carts) doesn't exactly bode well for a chop-socky action game, but Shinobi World works really well. The game itself has almost all the features of Shinobi (the guys with the guns, the fat sword-throwers and the Spiderman-type ninjas are all in there), and all the cuteness of Miracle World.

Graphics are bright, colourful and clear, and the sound is almost the same as the original Shinobi. I say almost, because it has that softer edge to it that you'd expect from a game of this type. Playability rates really high as well, as the game is just right at the initial difficulty and gets progressively more difficult as you go along, but not so tricky as to drive you away.

A great game all round - if you like Alex Kidd, you'll love this.

A great game all round - if you like Alex Kidd, you'll love this.