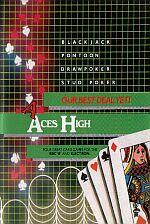 Aces High is a set of four card games, comprising of Pontoon, Blackjack, Draw Poker and Stud Poker. It comes on two cassettes supplied in a rather nice video-cassette style case, along with a twenty page manual. All the games will run either on a BBC or an Electron computer.

The manual supplied is extremely good, giving a detailed description of the rules of each game for those not already familiar with them. At the back of the manual is a section describing the origin and history of each game which is very informative.

The games themselves however don't live up to the professional presentation of the manual. They are pretty standard stuff as computer card games go with little flair or imagination used in the screen layout or graphics. Some variable height text drawing routines would certainly have done much for this game, instead of the boring and cramped look of the standard Mode 1 characters.

Mercifully, picture cards do have pictures unlike some programs I have seen in the past. Each card is drawn on top of the other with a slight offset allowing the values of each card in the hand to be read. The usual betting and banking routines are used in all the games. There is a fixed maximum betting level and the computer and player take turns in being banker. An option is provided for playing against the computer or with up to five players participating.

Although you may consider sound has no place in a computer simulation of this kind, I would have expected a little more than the standard and rather nauseating BBC bleep for the prompts. I have seen card games on other computers where even the flick of the cards is reproduced as they are dealt and drawn. In Aces High you get no such subtle use of sound.

Overall I found this set really disappointing. There is a great deal that could have been done to improve the graphics and make the games that much more interesting and professional in their presentation. As they stand, they don't even come up to the standard of some magazine listings I have seen - and don't represent very good value for money at the price being asked either. Definitely not one to storm the software charts.

Really disappointing. A great deal more could have been done to improve the graphics and make the games interesting and professional.
Logout