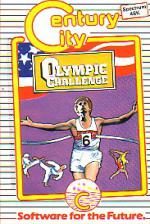 Puffing up to the finish nine months behind the rest of the field comes this Olympics simulation. This game must have taken to heart the maxim that it's the taking part that counts, not the winning, because it certainly isn't a winner.

There are ten events in which up to four players can participate. You must pound away on two keys to get results because there's no joystick option.

The graphics are not awful, but they're not brilliant and the stadium is nothing more than a grandstand filled with dots for spectators' heads.

Your athlete is a stiffly moving matchstick figure. Although the screen instructions are comprehensive, mastering the mechanics of some of the events is sometimes a challenge in itself. For instance, in the long jump you must keep the number one key depressed to build up speed. The matchstick man stays obstinately on the line, then off he suddenly (and woodenly) goes. You're supposed to press the zero key when you want him to jump. Then everything stops until you have ceased pressing another key to set the angle of the jump.

This is a cheap game so perhaps it's unfair to criticise it too harshly. But comparing it with Ocean's, Activision's or Quicksilva's superb Olympics simulations, you just can't help concluding that you'd get far better value saving up for one of them.

Comparing this with Ocean's, Activision's or Quicksilva's superb Olympics simulations, you just can't help concluding that you'd get far better value saving up for one of them.