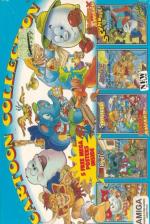 Following the success of the Dizzy Collection, Codemasters gives us another compilation of their budget wares. Cartoon Collection brings together a piece of pure action, four arcade adventures, and five luvverly posters (!). It's quite a package then. Well...

The action comes in the form of CJ's Elephant Antics. CJ's elephant antics involve little more than leaping from platform to platform, avoiding spikes and spitting peanuts at the bad guys, all for the sake of reaching the pachyderm's family in Deepest Africa. It's fair-to-middling stuff, reminiscent of The New Zealand Story even though CJ's two player simultaneous action has few similarities.

Spike In Transylvania conjures up all sorts of interesting images but it turns out to be a mediocre exercise in collecting and using objects, and keeping your eyes peeled for bad characters and dreary puzzle-solving possibilities. And let's not forget the annoying inconsistencies... for example, Spike, who looks suspiciously like Hagar The Horrible, can push some things (such as a small cannon) but not others (such as a stool). Yawn.

In Treasure Island Dizzy, everyone's favourite egg on legs is stranded on a desert island with a desire to escape back to his Yolkfolk. If you feel hard (boiled) enough, you can always try to find 30 pieces of gold along the way. Negotiating platform arrangements, avoiding the wildlife, collecting objects and solving puzzles is the order of the day here, but it hardly qualifies for the Chef's Special.

Seymour, the star of Seymour Goes To Hollywood, is very much like Dizzy, only his adventure is blantantly linear slow-paced tedium! I'd like to see less of Seymour and, to be honest, of this style of arcade adventuring as a whole. Seymour wobbles along, jumping occasionally, collecting items of interest and puzzle-solving potential, bumping into characters and communicating with them in a limited way, and so on. Gorsh.

Finally, there's the dinky Slightly Magic, complete with its 0898 helpline advertisement, ill-fitting speech, Czechoslovakian-cartoon music, colourful visuals, rubbish animation and simple-yet-laborious Sesame Street logic problems to solve (a hungry rock monster - I bet he eats rocks, so let's feed him those!). I would say it's fodder for kids but there are too many slightly irritating flaws. It's Slightly Tragic, more like.

The Cartoon Collection is a pack for the very young at heart. It's all just so inoffensive and harmless that I think I'm going to be sick.

There's nothing individually outstanding to be found here, but the pack is completely reasonable value for money. If you don't like any part of it, buy the other titles in their original budget form.

There's nothing individually outstanding to be found here, but the pack is completely reasonable value for money.
Logout