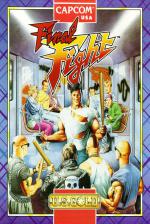 Just sometimes, there's nothing quite as satisfying as utterly sadistic bone-crunching... 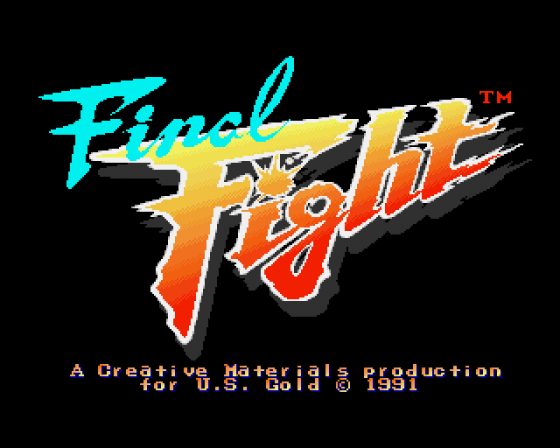 I'll tell you what - the home computer's a marvellous invention, isn't it? It's great. Nowadays, the Good Things in Life are simulated from the comfort and safety of your own pad. There's no need to socialise when you can put the real Uzi down and slap some heads in the front room instead.

There are times when I wonder just what the nation's mothers must make of all this computer fighting malarky. I'm sure they must find it all quite disturbing, what with these little people being bashed with fists and feet and baseball bats - and even axes - on screen. Why, we could be breeding a race of highly-trained killers here through a seemingly innocent medium!

To be honest, I couldn't care less. Look, let's face it: the world's no longer the global garden full of flower-pressing and skipping and kissing and love and stuff it once was. And just so long as all this rucking lark doesn't extend to the frail old dears on the streets then it's all right by me. 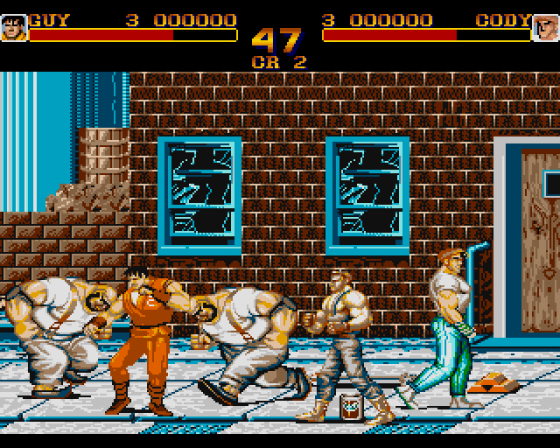 In Final Fight you get to smack hundreds of ruff 'n tuff geezers in the teeth. There are a fair few chicks to punch up the bracket, too. Oh dear. It's all getting out of hand, isn't it? Not really, no - it's all essential to the plot, which you get to see at the beginning a sort of Rock-Hard Computer Comic form.

You see, former street fighter Mike Haggar has been elected mayor with a policy to clean the scum from the city streets. Fair enough, but now the conflict's gone up a notch - it's just become something personal. The city's most ruthless gang - the Mad Gear - have kidnapped Mike's daughter, Jessica, who also happens to be emotionally attached to quiff-wielding hardman Cody and a good friend of his tough mate Guy. Can you guess what happens next?

Those are the Good Guys in Final Fight. You only get to play one of them at a time (of course) but you can involve a similarly inclined pal by getting him to join in the Good Fight as one of the remaining duo. (Now that's a real hoot - duffing each other up as well as the Bad Guys). 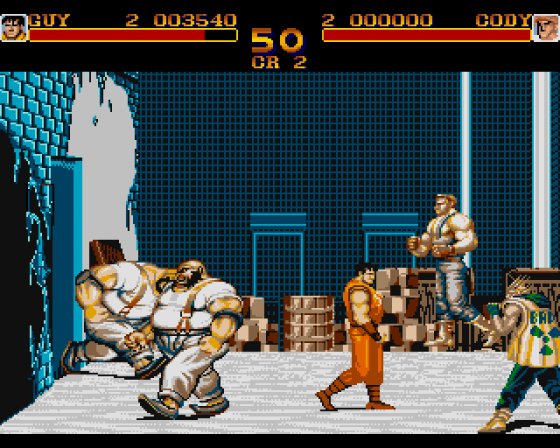 Each of these three Good Guys has his own Special Move. Fat Mike, for instance, has this hard crushing-and-smashing-the-opponent's-head-on-the-ground move. Guy wears tights and skips a lot, I can tell, because his secret is the 'Off The Wall' jump which involves spinning around in the air with his leg sticking out like some big girl. Cody's more of what you'd call a bit of a ladies' man - he really cuts it with a knife and his version of Guy's move is actually quite butch.

Mike and his mates aren't the only ones with Special Moves at their disposal - the Bad Guys have their own variations on the theme, too. Take the cute cart-wheeling chicks for example, and the fat, baldy slaphead who charges around like a bull.

So what makes Final Fight one of the best computer scraps in the world? In its favour there's the fact that almost all of the rest are rubbish, but even so, Final Fight's not really that brilliant in any technical way as a beat-'em-up anyway. It is a right laugh to play though, and that's far more important.

Which leads me nicely - and seeing as how you just asked - into some of the Penn criteria for a thumping good beat-'em-up...

It's got to be fast, and that extends to being able to perform ten million moves (punches, for example) in about two seconds flat. The fighter's repetoire of moves should come from a few, intuitive joystick movements and fire button presses. Players should then be rewarded by being able to develop skills according to their own ability.

A degree of context sensitivity would also be employed so that the style of move executed would depend on the situation - for example, if the player was very close to an opponent at the time of unleashing an attack then he'd perhaps headbutt him or grab his hair instead of just punching him (as would be the case if the distance between the combatants was greater) and the opponents would be seen to react accordingly.

The characters have to be large enough for the player to be able to see (everyone in Final Fight is pretty porky). And the opponents need to be many and varied in terms of intelligence and physical skills - i.e. the quantity and type of moves they can perform.

Anyway, Final Fight is a step in the right direction until the day that dream beat-'em-up comes. Anyone who enjoyed Golden Axe will go a bundle on this - and then some.

A fine conversion of the Capcom arcade hit. When it comes to venting frustrations, sadists, pugilistic thrill-seekers, uptight businessmen with ailing control over their bodily functions and marriages, and nine-pound weaklings used to getting sand kicked in their faces are all more than catered for here.

A fine conversion of the Capcom arcade hit. 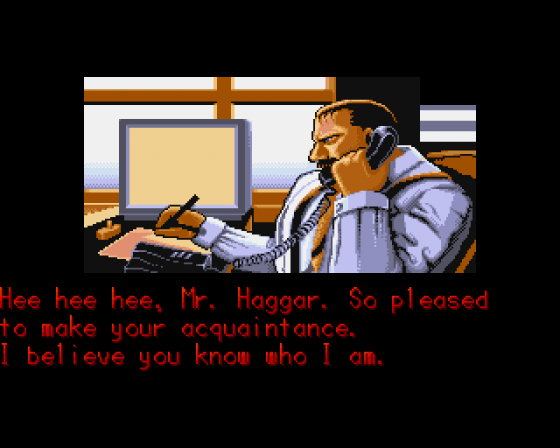