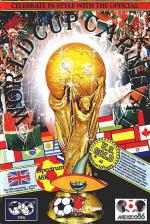 Clare Edgeley knocks out US Gold's latest in the first round.

Bleep. Action. And Robson flickers wildly up the pitch, dribbling the ball before him. A fumbling pass and he's intercepted. But by whom? Which team? The game suffers from excruciating colour clash. Where the ball once was is now a large squiggly blob of cyan and white. Eventually it turns into Hoddle - cyan because he's controlling the ball, Pasarella - black for the opposing team, and Lineker - white and representing your team. When those three colours get together definition flies out of the window and identification is impossible. The best you can do is twiddle your joystick and hope the mess will sort itself out.

On they dribble. World Cup Carnival is played as a five-aside. It's just as well really because the pitch is minute.

In fact the football part of World Cup Carnival is no more and no less than Artic's ancient World Cup - a game which did well enough in its time - almost two years ago - but compared with current techniques in programming the graphics and scrolling routines are straight out of the ark.

This is mutton dressed as lamb. The mutton being Artic's original and the lamb being a few frills US Gold has added to persuade you you're getting your money's worth. There are three new practice modes which, in my opinion, are more exciting than the game. Taking and saving penalties, practising ball control and a training mode. Taking a penalty is played in Daley's Decathlon style - to gain speed while running up to the ball, pump your joystick back and forth rapidly. Then press fire and tilt the joystick in the direction the ball is to travel. It's very difficult getting past the goalie who seems to have ESP. The graphics are better than the game proper and the simulation of running is quite realistic. Almost average anyway.

Saving penalties is tedious. Once your opponent has kicked the ball you dive in one of seven directions to save it. Ball control is a little competition to see how long you can keep the ball in the air by a variety of kicks and headers and is very boring. The training mode takes you back to Artic's original graphics and is a total let down.

Once I'd tidied up on my footie skills I decided to put them into practise. I anticipated being almost enthusiastic, I particularly wanted to test the penalty practise mode. Accordingly, I tried barging, tripping, kicking, but to no avail. Goal kicks were the only result meaning that all those semi-exciting practise modes are a complete waste of time.

You'll get more excitement out of watching the World Cup on TV than in wasting your time with this hurriedly cobbled together mish-mash of a game. And the posters, stickers, charts and badge which comes with the package in no way make up for the game's obvious shortcomings.

Incidentally, the Artie original is currently being sold to the trade at 65p so it should be out by now at budget prices.

The graphics are so bad, they're funny. Takes the trophy from Superman as easily the worst tie-up yet.

Takes the trophy from Superman as easily the worst tie-up yet. The graphics are so bad, they're funny.