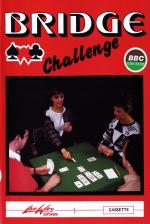 Whist and Bridge are two separate software packages from Livewire which I am reviewing together for convenience - the price quoted is for either program bought separately. There seems in fact to be some common use of program code between the two, as the representation of the hand and the card play are very similar. One odd difference is that while one remains South in both games, the deal rotates only in Whist. In Bridge you are always dealer with the first bid - an annoying limitation.

The programs use the Mode 4, monochrome screen presumably to allow bigger programs, but the displays are quite adequate and foreground and background colours may be adjusted to taste.

The problems lie in the playing strength of the program. I played a few hands of Whist and noted some rather dubious plays by the program and also was rather irritated that one was given few facilities for learning from the play. For example, you cannot replay a hand or play with the cards open. This applies also to Bridge, which is obviously a more complex program to allow bidding and playing with open dummies.

The Bridge program uses a simple version of the Acol bidding system which is adequately explained in the accompanying documentation. There are options for auto-bidding and card play. I ran a few hands on auto to try to judge the playing strength of the program. Once again I was not impressed, but not being an expert Bridge player I lent the package to a friend who is a county player for evaluation.

His assessment was damning - he noted many elementary blunders in bidding and play which all but the weakest beginner would avoid. He emphasised that he was not judging by his own standard but by that of an ordinary club player.

I reported recently on the latest version of the White Knight Chess program which does reach at least strong club standard in most phases of the game. I believe that programming methods for chess play have been much better researched since this was a major interest in the field of artificial intelligence at one time. Even so, I find it hard to believe that card games cannot be simulated with much greater playing strength than Live Wire have achieved, and I really cannot recommend these programs for any significant entertainment or educational value.

A final complaint. I discovered in the course of the review that the disc version uses the sort of protection that requires the old 8271 floppy disc controller to be present. Hence it would not run with my Solidisk DFS (1770 version) and I assume that it will not run on the BBC Plus either. The company admitted to me on the phone that they had not tested it on the new machine.

It really does seem a nonsense to me that companies should still be producing new discs which are incompatible with the hardware of many BBC users.

I find it hard to believe that card games cannot be simulated with much greater playing strength than Live Wire have achieved... I really cannot recommend these programs for any significant entertainment or educational value.