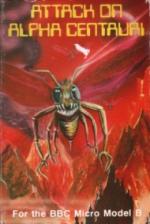 You move a laser base from side to side and fire at things swwoping at you from the sku. Pretty original, eh? Admittedly, the base moves on a prettily drawn planetary landscape, the things that swoop down on you are giant wasps and the graphics are well presented. But that tired old space invaders theme is not what I expect from a game produced in 1984. Nor do I expect any new arcade game not to offer a joystick option to protect my keyboard from the children's enthusiastic (I admit) bashing. I tried a machine code patch, but the program doesn't appear to use the usual INKEY minus system, so it didn't work. The game is very noisy, but fortunately you can turn the sound off.

In fairness, the game is much superior technically to the early space invaders games, and might well have attracted praise if released a year or two earlier. But technique without imagination is as barren in computer games as it is in music or the arts.