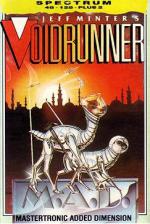 The Droid Wars are over, but the vengeful losers are intent upon attacking the Home-world with a retaliatory holocaust. They must be stopped.

You have control of a multi-directional green command craft supported by three drone fighters. At first these adopt a clustered grouping around the command ship, but on higher levels they go into symmetrical formations and move in different patterns.

Each craft has a blaster that can fire independently (and in later space regions they can fire in different directions).

Some aliens move predictably and others randomly; some drop bombs and others fire lasers. Some have to be blasted several times before they're destroyed, and then can spawn other aliens. There are 30 waves of attackers, and all aliens within a wave must be destroyed before the next can be tackled.

A periodically pulsing 'zapper' line scans the screen from top to bottom. If the command ship is on the line when it pulses, you and your drone craft are destroyed.

'Voidrunner is in the classic blast-'em-up mould. Like most of the Jeff Minter games I've seen, it's fast, colourful, and above all weird. Controlling the ships is easy, but keeping out of the way of the aliens is hard. I wasn't very impressed with the graphics - after playing the 16k Commodore version I felt more could have been done for the Spectrum. But the game isn't bad, and if you want an addictive blast you could do worse than buy this.'

'It's hard to describe Voidrunner's graphics as anything by poor - small, ill-defined clusters of pixels that don't seem to represent anything. And once I got over that shock I found Voidrunner a very poor Centipede variant. The inlay suggests this is a highly innovative shoot-'em-up, but the reality is disappointing. Controlling the four ships is quite easy and the keys are very responsive, so the game is simple to get into and playable for a while, but it's hardly addictive. Centipede games can be fun if you want to wallow in an afternoon's nostalgia, but there are better ones, and I expected a bit more of a game with the brains of Jeff Minter behind it.'

'At first sight Voidrunner looks very drab. But playing it converted me! The speed is just right: verging on the impossible, but fast enough to encourage you to keep going. My only gripe with the gameplay is my index finger, which took quite a battering after the first level. I was a bit disappointed by the second stage, which is basically a reversal of the first; but it's no cop-out, as the reversal calls for entirely different playing techniques. This is the first of the cult Minter games I've played, and I'm waiting for more…'

At first sight, Voidrunner looks very drab. But playing it converted me! The speed is just right: verging on the impossible, but fast enough to encourage you to keep going.